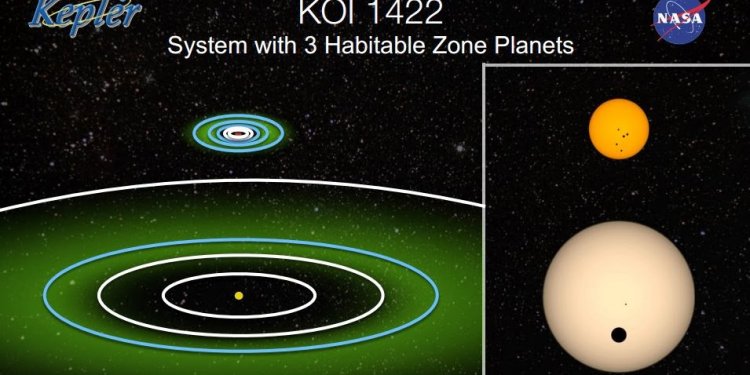 After years of observations and painstaking analysis, an international team of astronomers using independent Earth-based instruments has discovered what they believe is a potentially habitable, roughly Earth-size world orbiting the nearest star to the sun, according to a paper in the journal Nature released Wednesday.

The team, led by Guillem Anglada-Escudé of Queen Mary University of London, found the planet orbiting Proxima Centauri, a cool, reddish M-class dwarf star 4.25 light years from the sun. Dubbed Proxima b, the planet is roughly 1.3 times the size of Earth, circles its star at a distance of 4.3 million miles and completes one orbit, or local year, every 11.2 Earth days.

While Proxima b is much closer to Proxima Centauri than is to Earth’s sun, the planet is within the much cooler star’s habitable zone, meaning water could exist on the world’s sunlit side, raising at least the possibility of life.

The planet was discovered spectroscopically by analyzing very slight changes – doppler shifts – in the light from Proxima Centauri as the star was tugged back and forth by the gravity of its unseen orbiting companion. The wobble amounted to a periodic motion of about 3 miles per hour toward and away from Earth. The only known process that could produce such a periodic motion is the gravitational interplay between the star and a .

has discovered more than 2, 300 exoplanets to date by studying how a star’s light dims when a planet passes in front of it as viewed by the spacecraft. The Kepler data has led to a statistical conclusion that perhaps 30 percent of the stars in the Milky Way galaxy host potentially habitable worlds.

The discovery of a nearly Earth-size planet orbiting the sun’s nearest neighbor is a major step toward confirmation that such worlds are, in fact, common.

“So two totally independent techniques are converging on a number, ” Paul Butler, a Carnegie Institution astronomer and one of the co-authors of the Nature paper, told CBS News in a telephone interview from the institute’s Las Campanas Observatory in Chile. “And you know, there’s a lot of uncertainty in that number. It could be 20 percent, it could be 50 percent. But it doesn’t really matter. That’s a lot of stars.”

As a result, he said, astronomers are “beginning to become more and more comfortable with the notion that are very common. But up until now, it’s been sort of an abstraction, right? It’s been sort of a statistical analysis.