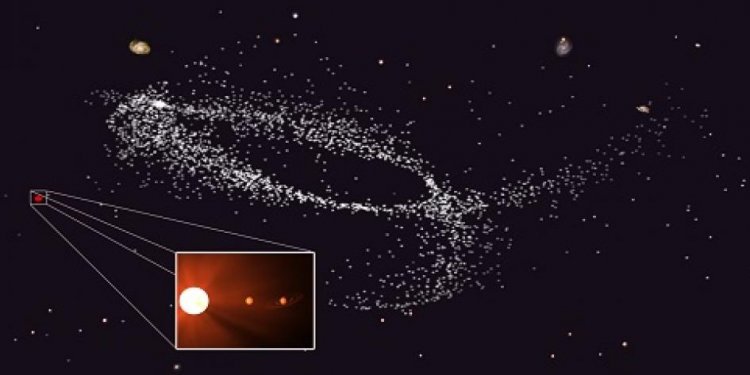 The discovery images of 2012 VP113, which has the most distant orbit known in our Solar System. Three images of the night sky, each taken about 2 hours apart, were combined into one. The first image was artificially colored red, second green and third blue. 2012 VP113 moved between each image as seen by the red, green and blue dots. The background stars and galaxies did not move and thus their red, green and blue images combine to show up as white sources.

Astronomers have found a new dwarf planet far beyond Pluto's orbit, suggesting that this distant realm contains millions of undiscovered objects — including, perhaps, a world larger than Earth.

The newfound celestial body, called 2012 VP113, joins the dwarf planet Sedna as a confirmed resident of a far-flung and largely unexplored region scientists call the "inner Oort Cloud." Further, 2012 VP113 and Sedna may have been pulled into their long, looping orbits by a big planet lurking unseen in these frigid depths.

"These two objects are just the tip of the iceberg, " study co-author Chadwick Trujillo, of the Gemini Observatory in Hawaii, told Space.com. "They exist in a part of the solar system that we used to think was pretty devoid of matter. It just goes to show how little we actually know about the solar system." [New Dwarf Planet Photos: Images of 2012 VP113]

For several decades, astronomers have divided our solar system into three main parts: an inner zone containing the rocky planets, such as Earth and Mars; a middle realm housing the gas giants Saturn, Jupiter, Uranus and Neptune; and an outer region called the Kuiper Belt, populated by distant and icy worlds like Pluto.

These images show the discovery of the new inner Oort cloud object 2012 VP113 taken about 2 hours apart on UT November 5, 2012. The motion of 2012 VP113 clearly stands out compared to the steady state background stars and galaxies.

The discovery of Sedna in 2003 hinted that this map is incomplete. Sedna, which is about 620 miles (1, 000 kilometers) wide, has an incredibly elliptical orbit, coming no closer to the sun than 76 astronomical units (AU) and going all the way out to 940 AU or so at its most distant point. (One AU, the distance from Earth to the sun, is about 93 million miles, or 150 million km.)

And now astronomers know Sedna is not alone out there. Trujillo and Scott Sheppard, of the Carnegie Institution for Science in Washington, D.C., discovered 2012 VP113 using the Dark Energy Camera, which is installed on a 4-meter telescope at the Cerro Tololo Inter-American Observatory in Chile.

Follow-up observations by the 6.5-meter Magellan Telescopes at Las Campanas Observatory, also in Chile, helped Trujillo and Sheppard determine details of 2012 VP113's orbit and learn a bit more about the object.

The body comes no closer to the sun than 80 AU, and it gets as far away as 452 AU. About 280 miles (450 km) wide, 2012 VP113 is large enough to qualify as a dwarf planet if it's composed primarily of ice, researchers said. (By definition, dwarf planets must be big enough for their gravity to mold them into spheres; the mass required for this to happen depends upon the objects' composition.)

Objects as distant as Sedna and 2012 VP113 are incredibly difficult to detect; astronomers really only get a chance when the bodies near their closest approach to the sun. [Our Solar System: A Photo Tour of the Planets]

Based on the amount of sky the scientists searched, Trujillo and Sheppard estimate that about 900 bodies larger than Sedna may exist in this faraway realm, which the astronomers dub the inner Oort Cloud. (The true Oort Cloud is an icy shell around the solar system that begins perhaps 5, 000 AU from the sun and contains trillions of comets.)

The study was published online today (March 26) in the journal Nature.

Orbit diagram for the outer solar system. The sun and terrestrial planets are at the center. The orbits of the four giant planet Jupiter, Saturn, Uranus and Neptune are shown by purple solid circles. The Kuiper Belt (including Pluto) is shown by the dotted light blue region just beyond the giant planets. Sedna's orbit is shown in orange while 2012 VP113's orbit is shown in red. Both objects are currently near their closest approach to the sun. They would be too faint to detect when in the outer parts of their orbits.

Astronomers don't know much about the origin or evolutionary history of Sedna and 2012 VP113 at this point. The objects may have formed closer to the sun, for example, before getting pushed out by gravitational interactions with other stars — perhaps "sister stars" from the sun's birth cluster, researchers said. Or inner Oort Cloud objects may be alien bodies that the sun plucked from another solar system during a stellar close encounter.