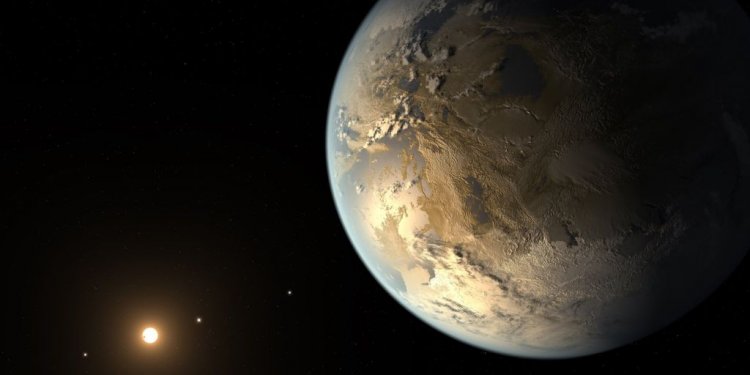 The newly discovered planet, Kepler-186f, is the first Earth-size exoplanet circling in its star’s habitable zone. The media worldwide is gleaming with fantastical headlines, but readers in the know may have an inkling the result is less than it seems.

It’s just one more on a long laundry list of exoplanets. But it’s the first on a list of Earth-like exoplanets.

Kepler-186f sizes in at 1.11 times the girth of Earth. But as with quite a few of Kepler’s planets, the system is too distant and therefore too faint to perform follow-up radial velocity observations, which would show the planet’s gravitational tug on its host star, and therefore reveal its mass. The team has to estimate its weight based on some pretty big assumptions.

The planet’s small size is a telltale sign that the composition is solid; it will have a hard time holding on to even the lightest elements, such as hydrogen and helium, so it probably doesn’t have a thick gaseous atmosphere either. But its composition could range from pure ice to pure iron, which results in a mass ranging from 0.32 to 3.77 times Earth’s mass. We may find in future years that this planet actually weighs more than twice as much as Earth, making astronomers re-classify it as a super-Earth after all.

Even so, there’s a huge difference between finding an Earth-like exoplanet and finding Earth’s twin. Kepler-186f’s orbit takes it along the outer edge of the star’s habitable zone so any liquid water on the surface would still be in danger of freezing. However, the team hopes that if the exoplanet is a little more massive than the Earth, this extra mass would result in a thicker atmosphere and therefore better insulation.

Eventually we’ll have collected a long laundry list of Earth-size exoplanets, and we’ll be able to take a closer look at each one, looking for key elements in their atmospheres and studying the activity of their stars. I fully think that if Earth 2.0 is floating somewhere in the nearby cosmos, we’ll find it. Just not today.