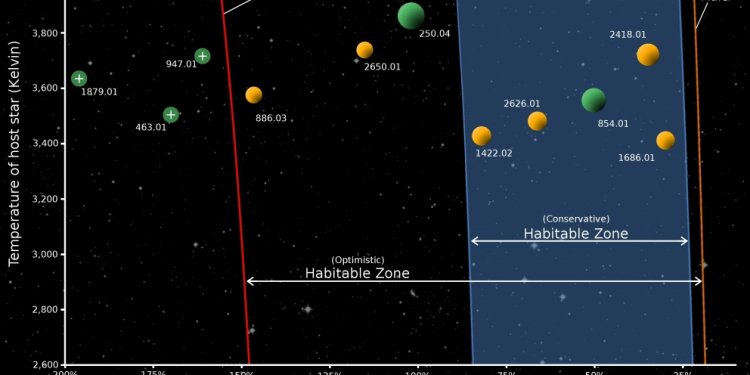 In a breakthrough discovery, clear evidence of at least one planet orbiting Proxima Centauri, the closest star to our Sun, has been found by the international Pale Red Dot collaboration. The exoplanet – dubbed Proxima b – has a minimum mass of about 1.3 times that of the Earth and is therefore most likely a terrestrial planet with a rocky surface, and has a short orbit of around 11.2 days. Our newly found neighbour also lies within its star's habitable zone, meaning that it could, in theory, sustain liquid water on its surface, and may even have an atmosphere. The team suggests that the system may even contain another larger exoplanet that is much further away, or smaller companion planets, but the evidence for these is currently not conclusive.

Proxima Centauri was first spotted in 1915 by the Scottish astronomer Robert Innes, and is a red-dwarf star that is merely 4.2 light-years away from the Sun, in the constellation of Centaurus. It is too dim to be seen with the naked eye and lies relatively close to the bright Alpha Centauri binary star system. Thanks to its proximity to us, we can clearly resolve the star's angular diameter, which is about one-seventh that of the Sun, while the star's mass is about an eighth of the Sun's.

Red dwarfs are small, cool, main-sequence stars, usually with a surface temperature of less than 4000 K. They abound in our galaxy, but are often difficult to observe, thanks to their low luminosity. But they are the most common stars in our stellar neighbourhood and at least 20 out of 30 of our nearest neighbours are red dwarfs. Of these stars, many are known to host exoplanets, and previous studies have found that almost 40% of red dwarfs have a "super-Earth"-class planet – with masses that are between 2 and 10 times that of the Earth – orbiting in the star's habitable zone.

One of the methods currently used by astronomers to detect potential exoplanets is known as the "radial-velocity technique", where they pick up tiny shifts in the wavelength of starlight caused by the presence of an exoplanet. These changes are derived from shifts in the parent-star's spectral lines caused by the Doppler effect. While this method works very well for enormous planets in close orbit to the stars, it is extremely hard to pick up Earth-sized planets. Fortunately, red dwarfs are so small that their "wobble" is much easier to detect with our current technology.

Although there have been hints of a possible exoplanet in orbit around Proxima Centauri for the past 15 years, the signal was not convincing enough and appeared to have some strange deviations. We still do not fully understand the dynamics of red dwarfs and how they change over different timescales, and as a result, researchers could not tell for sure if the previously detected signals from Proxima Centauri were truly from a planet or due to some variability introduced during the star's 88 day rotation, such as by a star spot, which also introduces a wobble.

Since 2013, the Pale Red Dot campaign has worked towards getting enough clear observations to tell for sure if the star hosted a planet. A way to do this was to carry out a long and continuous observational study of the star, and earlier this year, the team carried out a study of the star using the European Southern Observatory's High Accuracy Radial velocity Planet Searcher (HARPS) spectrograph at the La Silla Observatory in Chile, together with three other telescopes around the world.

According to project co-ordinator Guillem Anglada-Escudé, from Queen Mary University in the UK, such a long observing mode is normally not allowed by ESO for a variety of reasons. But after a lot of "convincing" by the collaboration, they were allowed to study the star for 20 minutes every night for a two-month period, from 19 January to 31 March 2016.

To ensure that the signal was in no way a false one created by Proxima Centauri, which is an active star, the team also carefully monitored its changing brightness during the campaign using telescopes at the San Pedro de Atacama Celestial Explorations Observatory in Chile and the Las Cumbres Observatory global network.

According to team-member Pedro Amado from the Instituto de Astrofísica de Andalucía in Granada, Spain, this continuous monitoring of at least five cycles of the stellar signal was crucial for the conformation. By analysing the 2016 data together with Doppler measurements collected by two ESO telescopes between 2000 and 2014, the team can confirm the existence of at least one planet in orbit around our neighbouring star.

The observations showed that Proxima Centauri approaches and recedes from the Earth at around 5 km/h and the pattern regularly repeats with a period of 11.2 days. By analysing the Doppler shifts, the researches determined that the planet has a minimum mass of 1.3 times that of the Earth and orbits Proxima Centauri at a distance of about 7 million kilometres – only five per cent of the Earth–Sun distance. The researchers deduce that the planet is terrestrial thanks to its Earth-like mass. It is also most likely tidally locked, but whether it has a synchronous rotation – i.e. the same side is always in the light or dark, like our Moon – is impossible to tell.

Although Proxima b orbits much closer to its star than Mercury does to the Sun, its parent star is much fainter than ours. This means that Proxima b lies well within the habitable zone around the star and has an estimated surface temperature that would allow the presence of liquid water. Despite the temperate orbit of Proxima b, the conditions on the surface may be strongly affected by the ultraviolet and X-ray flares from the star – far more intense than the Earth experiences from the Sun. But, according to team-member Ansgar Reiners at the Institut für Astrophysik, Universität Göttingen in Germany, this does not exclude the existence of an atmosphere, looking at the activity of the star today.

What will ultimately determine the actually habitability of the planet – including whether it currently has liquid water on its surface and an atmosphere – depends entirely upon its formation history. If the planet formed far away from the star and then migrated into its current orbit, it would have contained lots of water. On the other hand, it will be a dry planet, such as Venus or Mercury, if it formed close by, or so the researchers speculate.