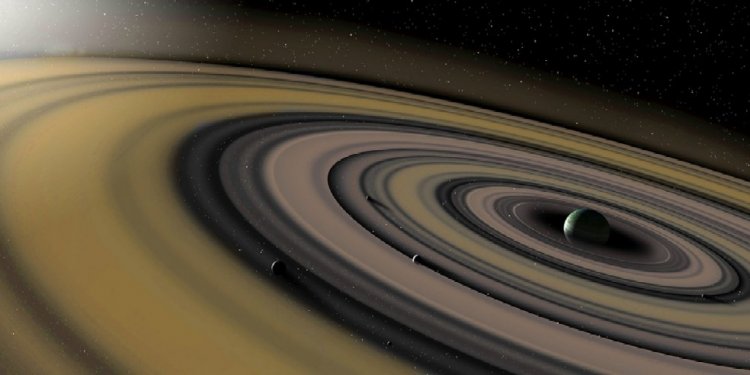 Saturn is the second biggest planet, but it’s also the lightest planet. If there was a bathtub big enough to hold Saturn, it would float in the water!

Number of Moons
More than 30 (we're discovering more all the time - 18 have been named
Titan is the largest moon of Saturn and the second largest moon in the entire solar system.

Composition
97% Hydrogen gas, about 3% helium gas and about 0.05% methane, plus ammonia. You could not stand on the surface because it's gaseous.

Length of Day
10 hours, 39 minutes in Earth time (the length of one rotation)
flattened at the poles because of its very rapid rotation

Length of a Year
29.5 Earth years (the length of one orbit around the sun)

Name
named for the Roman god of agriculture. The day Saturday is also named after him.

Discovered by:
Saturn has been observed in the night sky since ancient times but Galileo was the first to observe it with a telescope in 1610.

Saturn's rings can be seen with even a small telescope. A larger telescope show that there are multiple rings.

What are the rings made of?
The rings are made of chunks of rock and ice - some just tiny pieces of dust, some more than half a mile (one km) across.

How big are the Rings
Very wide: 150, 000 miles in diameter
but very thin: only a few hundred yards thick.

Where did they comefrom?
We don't know! Maybe they're left over material from when the planet formed. Perhaps they're the remains of moons that were destroyed when impacted by other bodies.

Earth's equator is tilted 23 degrees. It is this tilt that gives the planet its 4 seasons. Each year, as we orbit around the sun the tilt of the planet causes different parts of the planet to spend more time in sunlight. The days are longer and the nights shorter and most of us in North America experience summer. On the other half of the world in places like Australia and the other Southern hemisphere countries, the days are shorter and the nights are longer and they have winter. The farther away we are from the equator, the more pronounced the changes due to the tilt are.

Saturn's equator is tilted very similar to ours at 27 degrees. This gives Saturn the same seasonal changes as we here on earth experience.

Because of the tilt of Saturn and the thinness of the rings, every 14 years the rings look like they've disappeared when viewed through a small or medium sized telescope.

When Galileo discovered Saturn in 1610, he had less advanced equipment than we do now. He noticed Saturn's disappearing/ reappearing rings and thought he was losing his mind!

The Cassini Huygens mission to Saturn:

Unmanned mission to Saturn (no people are on board, but there's lots of equipment that sends information back to scientists here on Earth)

It reached Saturn's moon Titan on January 14, 2005, when it entered Titan's atmosphere and descended to the surface. It successfully returned data to Earth, using the orbiter as a relay. This was the first landing ever accomplished in the outer Solar System.