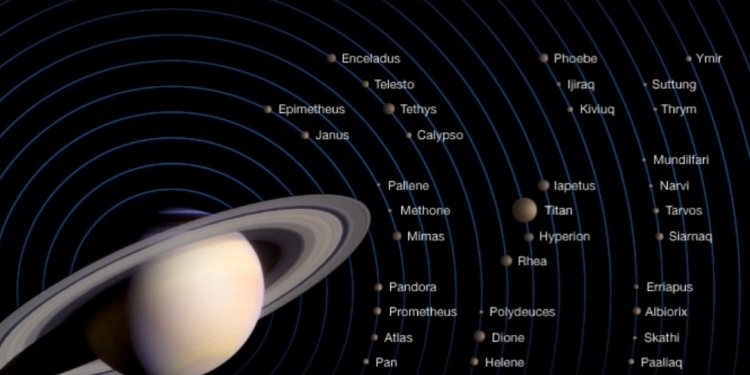 This view shows a close up of toward the south polar region of Saturn's largest moon, Titan, and show a depression within the moon's orange and blue haze layers near the south pole. NASA’s Cassini spacecraft snapped the image on Sept. 11, 2011 and it was released on Dec. 22.

Scientists believe that conditions on Titan are similar to Earth's early years (the main difference is that, because it is closer to the sun, Earth has always been warmer). According to NASA, "In many respects, Saturn's largest moon, Titan, is one of the most Earth-like worlds we have found to date."

NASA's Cassini spacecraft peers through the murk of Titan's thick atmosphere in this view, taken with Cassini's narrow-angle camera on Sept. 25, 2008.

The moon was discovered by Dutch astronomer Christiaan Huygens in 1655. The Huygens lander probe sent to the moon aboard NASA's Cassini spacecraft by the European Space Agency is named in his honor. Huygens was the first human-built object to land on Titan's surface. [Amazing Photos of Titan]

Titan's mass is composed mainly of water in the form of ice and rocky material.

Titan has no magnetic field.

Titan is surrounded by an orange haze that kept its surface a mystery for Earth's scientists until the arrival of the Cassini mission. Titan's atmosphere extends about 370 miles high (about 600 kilometers), which makes it a lot higher than Earth's atmosphere. Because the atmosphere is so high, Titan was thought to be the largest moon in the solar system for a long time. It wasn't until 1980 that Voyager was close enough to discover it was actually smaller than Ganymede.

Titan's atmosphere is active and complex, and it is mainly composed of nitrogen (95 percent) and methane (5 percent). Titan also has a presence of organic molecules that contain carbon and hydrogen, and that often include oxygen and other elements similar to what is found in Earth's atmosphere and that are essential for life.

There is an unsolved mystery surrounding Titan's atmosphere: Because methane is broken down by sunlight, scientists believe there is another source that replenishes what is lost. One potential source of methane is volcanic activity, but this has yet to be confirmed.

Titan's atmosphere may escape to space in a similar way that Earth's atmosphere does. The Cassini spacecraft has detected polar winds that draw methane and nitrogen (charged with interactions with light) out along Saturn's magnetic field and out of the atmosphere. A similar process is believed to happen on Earth with our own magnetic field.

There is an abundance of methane lakes, which are mainly concentrated near its southern pole. In 2014, scientists found a transient feature they playfully referred to as "Magic Island." It's possible that nitrogen bubbles formed in Titan's oceans sit on the surface for a period of time, creating a temporary island that eventually dissipates.

"What I think is really special about Titan is that it has liquid methane and ethane lakes and seas, making it the only other world in the solar system that has stable liquids on its surfaces, " Jason Hofgartner, a planetary scientist at Cornell University, told Space.com in 2014. "It not only has lakes and seas, but also rivers and even rain. It has what we call a hydrological cycle, and we can study it as an analog to Earth's hydrological cycle — and it's the only other place we know of where we can do that."

Because methane exists as a liquid on Titan, it also evaporates and forms clouds, which occasionally causes methane rain. Clouds of methane ice and cyanide gas float over the moon's surface.

"Titan continues to amaze with natural processes similar to those on the Earth, yet involving materials different from our familiar water, " Cassini deputy project scientist Scott Edgington, of NASA's Jet Propulsion Laboratory in Pasadena, California, said in a statement.

Sunlight is quite dim on Titan, and climate is driven mostly by changes in the amount of light that accompanies the seasons.

Data also suggests the presence of a liquid ocean beneath the surface, but it is still to be confirmed. [VIDEO: Tour the Strangest Lakes of Saturn's Moon Titan]

The Cassini spacecraft is currently in the middle of its Solstice mission at Saturn, the second mission for the spacecraft. The probe's primary mission, called Equinox, was aimed at exploring the Saturnian system and ended in June 2008 after four years orbiting the ringed planet. The spacecraft's mission was then extended, with its current Solstice effort expected to last until 2017, when Saturn's solstice takes place — hence its name.

The Cassini spacecraft launched in 1997 and carried the Huygens probe built by the European Space Agency. Huygens was equipped to study Titan by landing on the Saturn moon and achieved astounding results. For example, many mountains above 10, 000 feet high have been identified on the moon. [Video: Future Mission to Saturn's Moon Titan]

Cassini arrived in orbit around Saturn in 2004 with the Huygens probe landing via parachute on Jan. 14, 2005. Because of Huygens's observations, Titan became a top priority for scientists. The mission has achieved excellent results, such as taking the highest resolution images ever achieved of this moon´s surface.

During its primary and extended missions, Cassini was able to get fundamental data about Titan's structure and the complex organic chemistry of its atmosphere. It is because of Cassini's findings that scientists suspect the presence of an internal ocean composed of water and ammonia. The spacecraft has also spotted seasonal change, such as when an ice cloud formed in Titan's southern hemisphere in 2015 (suggesting that winter was going to be harsh in that zone).

The focus of the mission, as it relates to Titan, is to find signs of seasonal changes and volcanic activity.