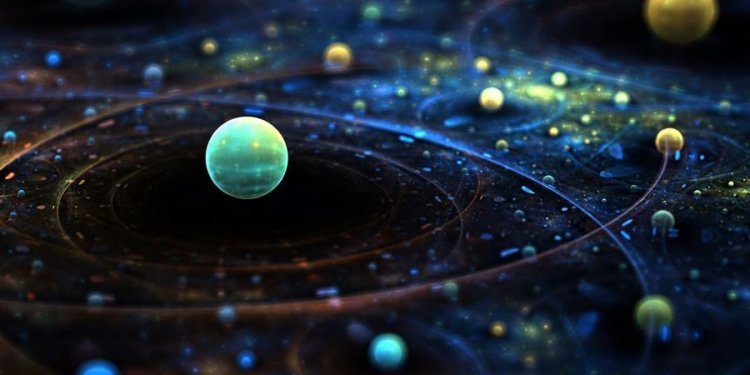 For example, the black hole in our Milky Way Galaxy is not active. To be active, the galaxy must have a source of gas, dust, and/or other debris that the super-massive black hole can readily consume. As a galaxy ages, its black hole eventually runs out of local consumable materials and the black hole becomes "dormant" (but not dead).

If a fresh supply of material is devoured, a dormant super-massive black hole can begin to emit high powered jets again. This happens from time to time when two galaxies collide, or a star or nebula (cloud of gas) gets pulled into the gravity domain of a super-massive black hole. There is an accretion disk around the black hole which accelerates the materials to close to light speed and some

of the material is ejected out of the disk in the form of jets.

Pictured to the left above is Messier 87 (M87 for short or NGC 4486) a very active "radio" galaxy in the Virgo Cluster. The small white round circle in the center is the super-massive black hole. This image is a composite from NASA's Chandra X-ray Observatory (x-rays in blue) and the National Science Foundation's Very Large Array (VLA) radio observations in red. In this image, cold gas matter from the cluster is falling towards the core of M87, where it's met by the near light speed jet, producing shock waves in the galaxy's nearby interstellar medium.

Also to the left, is a normal light view of M87 from the Hubble Space Telescope. The super long jet is 5, 000 light years in length! The yellow ball is the AGN center, whereas the long blue jet is synchrotron radiation. Synchrotron radiation originates from collisions of electrons and positrons circulating at extremely high speeds around the lines of a strong, twisting and growing magnetic field.

All AGN galaxies exhibit the same basic processes. Namely, a super-massive "active" black hole at the center and an accretion disk around the black hole. They all have a bright central core fed by local gas and/or a nearby star. They differ mainly in intensity of input. The more intense the galactic center, the higher the radiation energy it emits. The radiation emitted varies from radio and infrared waves to x-rays and gamma-rays.

Before we dive into the various sub-categories of AGNs, let us take a look at the basic structure of active galaxies.

Basics Of An Active Galaxy

The most popular jet formation hypothesis is that the twisting of magnetic fields in the accretion disk collimates the outflow of plasma along the rotating axis of the black hole so that jets emerge from each face of the disk. See the artist's conception at the left.