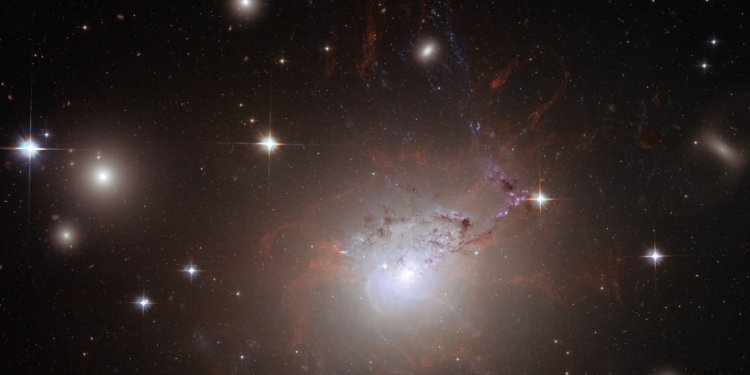 The first photograph by 16 dishes in the MeerKAT radio telescope array revealed over 1, 300 galaxies, only 70 of which were previously known. The array will include 64 dishes when it is complete.

The first time the MeerKAT telescope turned its eyes to the sky, it saw more than 1, 200 previously unknown galaxies.

Located in South Africa, MeerKAT announced its first galactic harvest on July 16. The first snapshot taken by the radio telescope shows more than 1, 300 galaxies in a patch of universe where only 70 were previously known.

A zoomed-in view of the MeerKAT first light image shows 10 percent of the original picture, and includes more than 200 radio sources. Previously, only five radio sources were known in this square of sky (those objects are circled).

The impressive new image from MeerKAT captures less than 0.01 percent of the sky, and was taken using only one-fourth the number of radio dishes that will eventually make up the MeerKAT array. By 2017, 64 of MeerKAT's 13.5-meter diameter (44.3 feet) dish antennae are expected to be operating, the statement said. Only 16 are currently operating.

Early analysis of the first image has revealed that some of the galaxies spotted by MeerKAT clearly have supermassive black holes at their centers. The image captured at least one Fanaroff-Riley Class 2 (FR2) object, according to the statement, which is a massive black hole with gas and dust falling onto it. The black hole then spews some of the material back into space in the form of jets that emit radio waves. The particles in the jets move at close to the speed of light.

The four insets show zoomed in sections of the MeerKAT first light image. The two panels to the right show distant galaxies with massive black holes at their centers.

The SKA radio telescope network will use radio telescopes in South Africa and Australia to effectively create a single, large telescope with increased resolution and power. Currently, the largest radio telescope in the world is the Aricebo telescope in Puerto Rico, with a diameter of 305 meters (1, 000 feet). Meanwhile, construction was just completed on the Five-hundred-meter Aperture Spherical Telescope (FAST) in China, which will have an observing diameter of nearly 500 meters (1, 640 feet).

This image shows about 1 percent of the full MeerKAT image, which contains a Fanaroff-Riley Class 2 (FR2) object: A massive black hole in the distant universe, with gas and dust falling onto it. The black hole spews some of the material back into space in the form of jets that emit radio waves.

Radio telescopes are ideal for many astronomical purposes, including peering through clouds of gas and dust that can obscure other wavelengths of light. In addition, they are useful in the hunt and observation of pulsars and have been used in the search for communications signals from intelligent alien civilizations.

The launch of MeerKAT and its first results are "a significant milestone for South Africa, " Rob Adam, project director of SKA South Africa, said in the statement. "The South African team of more than 200 young scientists, engineers and technicians, in collaboration with industry, local and foreign universities and institutions, has developed the technologies and systems for MeerKAT."