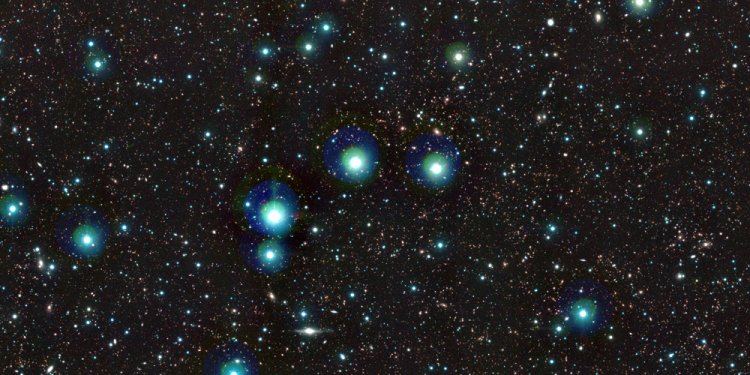 Not long ago we talked about what the Milky Way would look like when seen from afar. I had mentioned Poul Anderson’s World Without Stars, which appeared in Analog in 1966 under the title The Ancient Gods. In the Anderson tale, a starship crew is sent to make contact with a recently discovered technological civilization that lives on a world hundreds of thousands of light years from the galactic core. Now a recent paper deepens our understanding of this environment deep in the galaxy’s outer halo.

Recall that the Milky Way is about 100, 000 light years in diameter, and that the distance to the nearest large galaxy is roughly 2, 500, 000 light years. Anderson’s crew is over 200, 000 light years from the core, which puts them in the outer halo, a sparse spherical volume of space that stretches out 500, 000 light years, well beyond the familiar, highly visible disk. While the stars in the galactic disk are on nearly circular orbits in the plane of the galaxy, the halo stars are on more elliptical orbits that are randomly oriented, so that while inner halo stars can pass through the disk, most of their lives are spent well above or below the plane of the galaxy. The inner, visible part of the halo is where we find the ancient, metal-poor globular clusters.

Image: Structure of the Milky Way, showing the inner and outer halo. Credit: NASA, ESA, and A. Feild (STScI).

Astronomer John Bochanski (Haverford College, PA) and team, however, are looking out well beyond the globular clusters. The researchers note in their paper in The Astrophysical Journal Letters that there are few known outer halo stars at distances over 120 kiloparsecs, which works out to about 390, 000 light years — in fact, the list of known halo stars at this distance yields a grand total of seven, with the paper adding an additional two. The galaxy’s outer halo, we learn, is largely unexplored, but as we’ll see, it holds implications for galaxy formation theories.