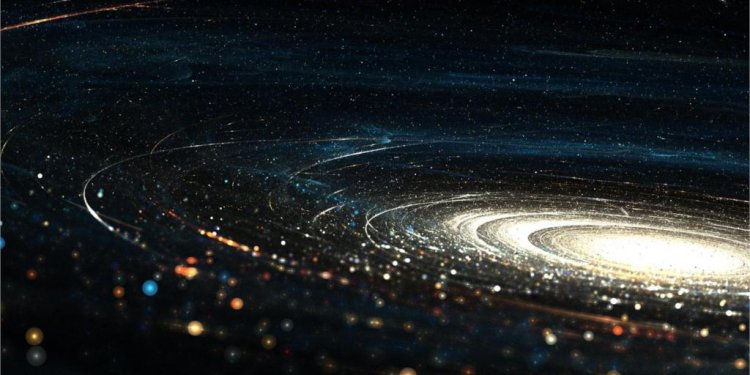 If you gaze out into the night sky with a telescope, and see beyond what’s visible to the naked eye, you could see a lot of “stars” that are actually imposters. Many of the points of light we often think are individual stellar objects are actually galaxies, collections of millions to trillions of stars. Galaxies are composed of stars, dust, and dark matter, all held together by gravity. Below we discuss galaxy formation, galactic collisions and other facts about these so-called “island universes.”

The Milky Way Galaxy is organized into spiral arms of giant stars that illuminate interstellar gas and dust. The sun is in a finger called the Orion Spur.

At left is an optical view of M83. At right is a composite image showing X-ray data from Chandra in pink and optical data from the Hubble Space Telescope in blue and yellow. The ULX is located near the bottom of the composite image.

Galaxies come in a variety of shapes, sizes, and ages. Many have black holes at their centers. In some cases, a galaxy’s central black hole is extremely large or active, it’s surrounding area producing a tremendous amount of energy that astronomers can see over great distances. Material circling the black hole may be accelerated outward by its jets. Other galaxies may contain objects like quasars, the most energetic bodies in the universe, at their core.

Astronomers aren't certain of exactly how galaxies formed. After the Big Bang, space was made up almost entirely of hydrogen and helium. Some astronomers think that gravity pulled dust and gas together to form individual stars, and those stars drew closer together into collections that ultimately became galaxies. Others think that the mass of what would become galaxies drew together before the stars within them were created.

In the 1900s, many astronomers thought that the entire universe lay within our galaxy, the Milky Way. Others argued that the spiral-shaped blobs thought to be dust and gas were separate; Harlow Shapley called them "island universes." It wasn't until 1924, when Edwin Hubble identified several special pulsing stars called Cepheid variables in some of these so-called nebulae and realized that they lay outside of the known span of the Milky Way, that astronomers realized they were, in fact, completely unique collections of stars at distances well beyond our home galaxy.

After Hubble measured the distance to individual galaxies, he went on to measure their Doppler shift — how much light from the galaxies was stretched out due to their motion. He determined that galaxies all around the Milky Way are moving away from us at terrific speeds. The farther away the galaxies are, the faster they are fleeing. Because of this, he was able to determine that the universe itself is expanding. Later astronomers determined that this expansion is accelerating.

Galaxies are classified by their shape. Each type has different characteristics and a different history of evolution.

The barred spiral galaxy NGC 1073 is seen in this image from the Hubble Space Telescope.