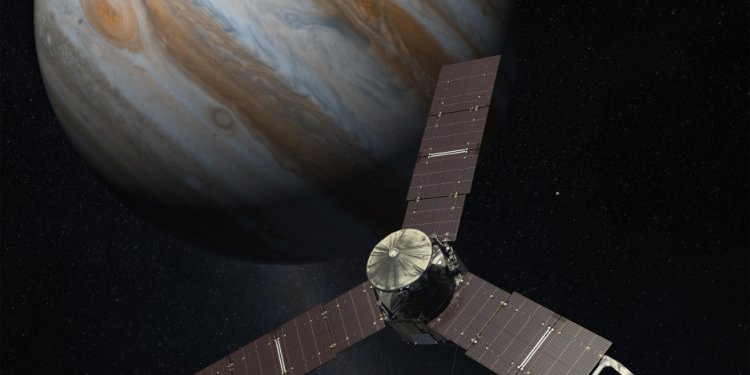 Artist view of a newborn giant planet. A young planet the size of Jupiter in orbit around its sun has been discovered. Illustration: Mark A. Garlick/markgarlick.com

The planets, just a few million years old, are among the youngest ever to be discovered. Reported by two separate teams of researchers, they are both are giant planets which take around five days to orbit their stars.

“These two papers are probably the first solid evidence that you can find planets close to their stars at such a young age, ” said Trevor David from the California Institute of Technology, co-author of one of the studies. What’s more, he says, the research is helping to solve the puzzle of how some giant planets end up on such orbits.

This image shows the K2-33 system, and the planet K2-33b, compared to our own solar system. Illustration: NASA/JPL-Caltech

Based on a combination of measurements from ground-based telescopes and the orbiting Kepler telescope, research by David and colleagues reveals details of a young planet known as K2-33b that lies around 470 light years away in the constellation of Scorpio. Orbiting a star between five and ten million years old, at around one-twenty fifth of the distance of the Earth from the sun, the planet is 50% larger in size than Neptune and could still be developing, the scientists believe.

“With K2-33b, we’re getting a glimpse of planet formation as it occurs, ” said Erik Petigura of the California Institute of Technology, also an author of the study published in Nature. “Astronomers have believed for some time that gaseous planets need to form in the first 10 million years of their star’s lifetime. K2-33b provides some of the best direct proof of this theory.”

With the planet and star in their infancy, the researchers say K2-33b must either have been born in its current location, or formed further from the star and rapidly migrated inwards due to the gravitational tug of the disk of gas and dust which gave rise to the planetary system. Indeed possible traces of this so-called protoplanetary disk were detected by the researchers from data collected by Nasa’s Spitzer space telescope.

Crucially, the authors report, the age of the star together with the planet’s short orbit rules out a third option: that the planet was kicked towards its sun by interactions with other planets or stars. This process, known as scattering, results in planets adopting highly elongated, long-period orbits that over many hundreds of millions of years morph into a circular path with a short orbit.

“The fact that K2-33b is so close-in at such a young age means that if it did migrate, it needed to do so quickly, ” said Petigura. “This rules out a whole class of migration models that take hundreds of millions of years to operate.”

The idea that large planets can migrate due to interactions with the disk is supported by research from a team led by Jean-Francois Donati of the University of Toulouse. Based on ground-based measurements, the team report the discovery of a young planet the size of Jupiter in a near-circular orbit around it its sun, 430 light years away in the constellation of Taurus.

Also published in the journal Nature, the study reports that the distance between planet and its star is just over one-twentieth of the distance of the Earth from the sun, making the planet a “hot Jupiter”.

“The first exoplanet discovered [around a sun-like star, in 1995] was a hot Jupiter, ” said Donati. “It took every astronomer by surprise because at the time we all expected giant planets to be far away from their stars, like Jupiter is from the sun.”

Many astronomers, including Donati, argue that such planets could not have formed in such a location as there would not be enough material available for the formation of a planet the size of Jupiter. Instead, they say, such planets are more likely to form further out in the cold, material-rich regions of the protoplanetary disk.

An artist’s impression of K2-33b, one of the youngest exoplanets detected to date. Illustration: Nasa/JPL-Caltech

While previous discoveries of hot Jupiters orbiting mature stars with tilted, highly elongated orbits has added weight to the idea that at least some of them were then kicked towards their sun, the notion of planetary migration due to interactions with the disk previously had little evidence to back it up.

But Donati believes the discovery of a young hot Jupiter with a near-circular orbit around a star only two million years old has changed that. “This is really the first evidence that this migration is occurring, ” he said.

“I think it is exciting - these are planets where you have evidence that they just formed, so we are looking at baby planets, ” said David Sing of Exeter University, who was not involved in either of the studies. “All of the information of how a planet formed is still there, whereas with much older planets it could be harder to [work out] how it formed, or how it got there because it could have changed over billions of years.”