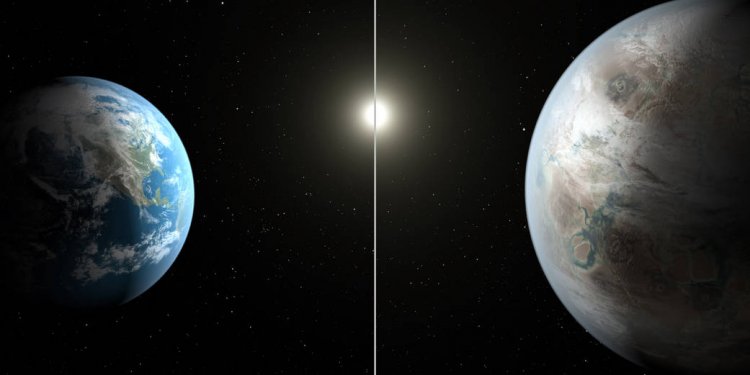 Like most first glimpses of new frontiers, Pluto held so many surprises for New Horizons that the past eight months have seen a steady stream of discoveries coming from the mission, as the spacecraft’s small radio transmitter beams its gathered data back home. The biggest surprises have been Pluto’s surface and atmosphere, which are restlessly active and diverse despite average temperatures of only tens of degrees above absolute zero. Some scientists expected New Horizons would find Pluto to be little more than an inert, sunlight-starved orb. Instead, the spacecraft encountered a world where nitrogen glaciers flow down into plains of frozen methane from towering mountains of water ice. Sunless half-frozen oceans lurk deep beneath the surface, and multiple moons tumble overhead through hydrocarbon-hazed red skies that tinge to blue at sunrise and sunset.

But beyond celebrating the visceral thrill of the Pluto flyby itself, or the intellectual frisson of gazing on full-color close-ups of a place so alien and faraway, most of these discoveries from New Horizons have so far found a muted public reception. The story has simply been that we went to Pluto, and witnessed wonders. What those wonders actually mean—for our understanding of Pluto, for planetary evolution, and for the broad history of the solar system—is something that the mission scientists themselves are still working out. They summarize their latest thoughts in this week’s edition of the journal Science, with a quintet of papers that constitute the synthesis of our current understanding of Pluto.

Here are the three big-picture takeaways from our emerging portrait of this strange, frozen world:

1. PLUTO IS YOUNG AT HEART

New Horizons was only able to closely study one hemisphere of Pluto as it whizzed by, revealing a sprawling heart-shaped plain of mixed nitrogen, carbon monoxide and methane ices ringed by mountains and heavily cratered terrain. Dubbed Sputnik Planum, the 1, 000-kilometer-wide western lobe of the heart looks almost bubbly, like a churning pot of creamy oatmeal or frothy foam on a pint of Guinness beer.

An 80-kilometer strip of Pluto’s surface, stretching from the crater-free northwest shoreline of Sputnik Planum on the right, through blocky mountains of water ice, into rugged, pitted icy plains on the left.
Credit: NASA/JHUAPL/SWRI

Sputnik Planum has no craters, and is likely less than 10 million years old, probably formed from fresh snow and glaciers sliding down from nearby rugged highlands. Its bubbles are convection cells driven by heat rising through the thick ice from deep below. A small “mountain range” at Sputnik Planum’s northwestern edge is in fact blocks of water ice that seem to be bobbing in the higher-density ices like cubes in a glass. These blocks are perhaps crust fractured and overturned by some tectonic upheaval. To the south, New Horizons scientists have spied what seem to be two young cryovolcanoes, Wright Mons and Piccard Mons, relatively unblemished kilometers-high mounds surrounding central pits at least as deep.

Appearing as a dark pit in the inset, the 150-kilometer wide, 4-kilometer-high mound of Wright Mons is a possible cryovolcano that erupts volatiles such as water, ammonia and methane rather than molten rock.
Credit: NASA/JHUAPL/SWRI

Taken together, these features show that more than four billion years after its formation, Pluto still somehow retains enough internal heat to maintain an active geology and, here and there, a very youthful surface replenished by cryovolcanism and the seasonal sublimation and deposition of volatile ices. Deep within the world, Pluto’s heat could be sufficient to sustain an ocean of ammonia-rich water beneath a thick roof of water-ice bedrock. Long linear striations upon parts of Pluto’s surface hint that any subsurface ocean may be slowly freezing, deforming the ground and releasing additional latent heat as it turns to ice.

2. MOST OF ITS SURFACE IS STILL ANCIENT ANDREALLY WEIRD

Sputnik Planum’s smooth-featured youth is exceptional. Most of the rest of Pluto’s exterior is far more craggy and ancient, altered extensively across hundreds of millions or billions of years. Varying mixtures and combinations of nitrogen, water, carbon monoxide and methane that make up Pluto’s crust create different varieties of ice and terrain, similar to how rocks on earth can form cliffs of soft chalk or mountains of hard granite. These varying substrates can then be textured with pits, grooves and channels produced by subliming ice, eroding glaciers and precipitating frost—effects driven by Pluto’s weather, which fluctuates in decades-long seasons.

Centered on Sputnik Planum, this partial geological map of Pluto reveals the diversity of terrain seen by NASA’s New Horizons mission during its flyby.
Credit: NASA/JHUAPL/SWRI

The results are usually bizarre, and difficult to decipher. Northeast of Sputnik Planum, past stretches of pitted plains, the surface is wrinkled with closely spaced ridges that rise sharp and knife-like half a kilometer into the air. This “bladed terrain” may be vestiges of an old, once-buried layer of highly durable material exhumed and weathered by some combination of scouring ice, swirling winds and glaring sunlight. Or it may be newer, formed from airborne methane frost glazing rigid crests of water ice. What is clear is that Pluto’s landscape cannot be understood without also closely studying its weather—its atmosphere.

New Horizons has revealed Pluto’s tenuous atmosphere of gaseous nitrogen and methane to be colder and more compact than previously thought, and layered with hazes of soot-like hydrocarbon particles produced by ultraviolet light and cosmic rays. The particles are reddish, but at sunrise and sunset when sunlight passes through the thickest hazes, they scatter the light to give Pluto’s sky a blue tint. The particles are also sticky, and grow like snowflakes over tens of thousands of years, until at last they become heavy enough to fall, accumulating as crimson sludge in the world’s most ancient terrains.

The most primordial part of Pluto’s surface may be a hemisphere-spanning splash of red called Cthulhu Regio, a region so thoroughly pulverized by craters it is thought to be some four billion years old. Curiously, it is directly adjacent to the western edge of what could be Pluto’s youngest landform, the fresh, cream-colored ices of Sputnik Planum. Even Sputnik Planum, it turns out, has surprisingly ancient roots: Its youthful ice fills a deep basin that may be the oldest, largest impact crater still in existence on Pluto.

A close-up of the transition between the fresh, light-colored ice of Sputnik Planum and the dark, heavily cratered and ancient terrain of Cthulhu Regio.
Credit: NASA/JHUAPL/SWRI