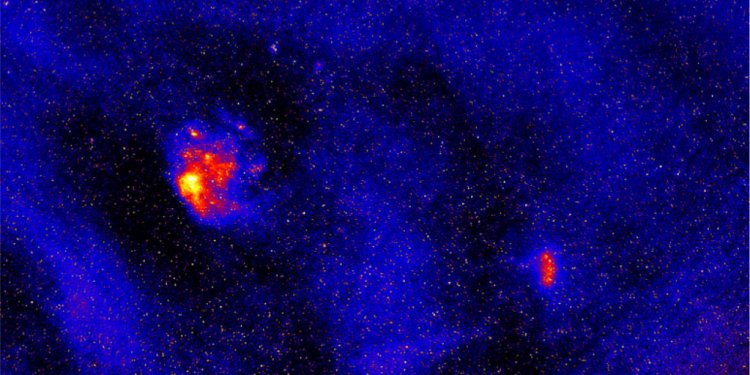 Discover flaring novae in nearby galaxies!

There is currently a debate about the rate of novae (white dwarf stars in binary systems that undergo violent periodic surface outbursts) in different types of stellar populations — principally older stars in elliptical galaxies and the central bulges of spirals compared to younger stars in irregular galaxies and the disks of spirals. Novae rates depend on properties of the different populations such as the number of binaries, the mass of the pre-nova stars, and the population’s formation history.

In this project, you will search for novae in the nearby Andromeda Galaxy by “blinking” images of portions of Andromeda taken at different times. You will be using data from a 0.9 meter telescope archive of images that extends back several years. You will be measuring apparent magnitudes of suspected novae over time to determine their classification and rate of decay. With a little bit of luck you and your students may be the first to discover a new nova!

Study the properties of various star clusters in our galaxy!

Many people can find the Pleiades in the sky, but few know that these stars are a physically connected group. Stellar clusters represent an important snapshot of stellar evolution. Because they are all at the same distance from us, it’s possible to compare their properties without the confusion introduced when the stars are at differing distance. And with images of a cluster taken through several different filters, we can estimate the temperature and the luminosity of each cluster member.

In this project you will determine both the distance and the age of different star clusters using images taken at the 0.9-m WIYN telescope. You can examine the question of membership: it’s not easy to tell which stars are part of a cluster and which ones are foreground or background stars.

Variable stars, or stars that undergo intrinsic light variations, come in many varieties. In this project you will look at the properties of a class of bright semi-regular stars that have spectra similar to the Sun’s.

These giant and supergiant stars are highly variable due to their present evolutionary state in which they pulsate irregularly and, at times, eject dense shells in which carbon atoms form into opaque grains, blocking much of the emitted light. The next evolutionary step for these semi-regular variables is to become planetary nebulae (or maybe a supernovae) after which their remnant core will remain as a white dwarf star. By comparing the spectra of these stars with that of the Sun, we may better understand the properties of both.

In this project, you will be using data from the Coudé Feed telescope. These spectra will be used to create a data base of these odd variables. You will use these data to study the relationships between changes in spectral appearance, observed spectral features, and the brightness variations of these stars. The goal is to improve our understanding of these stars, their physical state and the nature of their changes, and how they fit into the general scheme of stellar evolution.