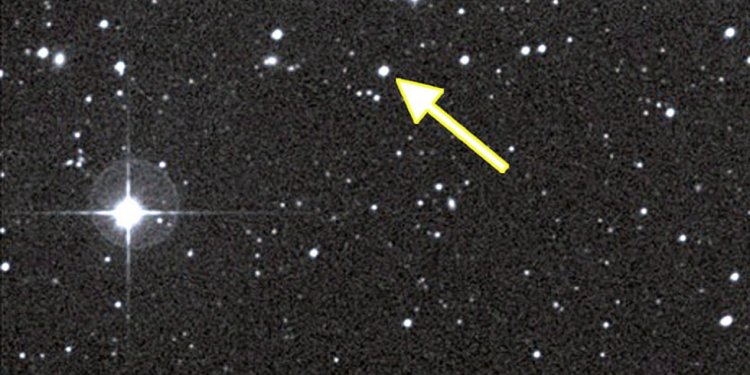 A planet with 10 times the mass of Earth may be orbiting the sun beyond Neptune. This image shows the theorized orbit of the giant planet and six other solar system objects beyond Neptune.

Brown and Batygin considered the possibility that other relatively small KBOs might be shaping the orbits. But the duo's calculations suggested that, for this to work, the Kuiper Belt would have to harbor about 100 times more mass than it's thought to possess.

So they moved onto another possibility — a big, undiscovered planet out in the solar system's frigid outer reaches. This is not such a wild or unprecedented idea; in the past few years, other researchers have suggested that a mysterious, massive Planet X could be responsible for the surprising orbits of newfound Kuiper Belt objects.

The new modeling work by Brown and Batygin bolsters this intriguing scenario. Their simulations show that the gravitational influence of a roughly 10-Earth-mass Planet Nine in an anti-aligned orbit — one in which the planet's closest approach to the sun is 180 degrees across from that of all the other planets — could explain the KBOs' odd orbits. [Our Solar System: A Photo Tour of the Planets]

This putative Planet Nine can also explain the distinctive and weird orbits of two dwarf planets in the Kuiper Belt, Sedna (which Brown discovered in 2003) and 2012 VP113, researchers said. The simulations also predicted that some KBOs would have orbits that are inclined perpendicular relative to the plane of the eight official planets. Four such bodies have been found recently, scientists said.

"We plotted up the positions of those objects and their orbits, and they matched the simulations exactly. When we found that, my jaw sort of hit the floor, " Brown said.

"When the simulation aligned the distant Kuiper Belt objects and created objects like Sedna, we thought this is kind of awesome — you kill two birds with one stone, " Batygin said in the same statement. "But with the existence of the planet also explaining these perpendicular orbits, not only do you kill two birds, you also take down a bird that you didn't realize was sitting in a nearby tree."

Planet Nine may have formed closer to the sun, and been kicked out to its current location after a gravitational interaction with Jupiter or Saturn, Brown and Batygin said.

Caltech professor Mike Brown and assistant professor Konstanin Batygin worked together to predict the existence of "Planet Nine, " a massive body orbiting the sun beyond Neptune.

If Planet Nine is real, it would fill a notable gap in our solar system, they added.

Brown and other observational astronomers (Batygin is a theorist) are now searching for Planet Nine. The planet's orbit has been mapped out, but its exact location is not known. Still, Brown said, many telescopes on Earth have a good shot at spotting the planet, if it exists.

"I would love to find it, " Brown said. "But I'd also be perfectly happy if someone else found it. That is why we're publishing this paper. We hope that other people are going to get inspired and start searching."

Brown has discovered or co-discovered a number of objects in the outer solar system, including Sedna and the dwarf planet Eris, which is about the same size as Pluto. These finds played a role in the 2006 reclassification of Pluto to "dwarf planet" — a decision that Brown supports.

"All those people who are mad that Pluto is no longer a planet can be thrilled to know that there is a real planet out there still to be found, " Brown said. "Now we can go and find this planet and make the solar system have nine planets once again."