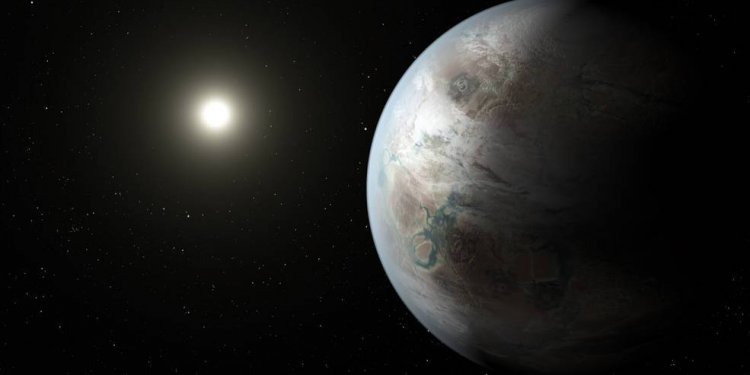 An artist imagines what the surface of the planet Proxima b, orbiting the red dwarf star Proxima Centauri, might look like. M. Kornmesser/ESO/NASA hide caption


An artist imagines what the surface of the planet Proxima b, orbiting the red dwarf star Proxima Centauri, might look like.

After all, when the Wright Brothers lifted their rickety plane off the sands of Kitty Hawk, the rest of the world was just out buying their eggs, milk and toilet paper. On that day who knew — or could imagine — that decades into the future millions of people would be sitting in giant jet-planes watching Direct TV and soaring five miles above the planet's surface.

I'm telling you this because two weeks ago a threshold of discovery was crossed when astronomers announced they found a planet orbiting Proxima Centauri — the sun's closest neighbor.

Now, you may have heard that news — but did you really hear the news?

As an astronomer, I can tell space really is crazy big. A light-year is the distance light crosses in one year — that's almost 6 trillion miles. But our galaxy, the Milky Way, is a city of stars stretching 100, 000 light-years across. The vast scale of the Milky Way means most of its stars are many thousands of light-years away from us. That's a very long way away, indeed, considering the fastest thing we've ever made would take a few hundred thousand years to cross just one light-year.

But Proxima Centauri, that's as close as it gets.

It's the star next door (Proxima is actually part of a triple star system called Alpha Centauri). Proxima's proximity matters a lot because, as Albert Einstein told us, nothing can travel faster than the speed of light, and that locks distance and time together. Even if you had some kind of super-technology blasting your spaceship to 10 percent of light-speed, it would still take centuries, millennia or more to reach most stars.

But not Proxima Centauri. Lying just about four light-years away, that hypothetical super-technology could get you there in 40 years — less than a human lifetime. If you could get closer to the speed of light then you might reach Proxima in under 10 years.

That's why finding a planet orbiting any of Alpha Centauri's stars has been the stuff of science fiction for decades (go watch Avatar again if you don't believe me). The fact that Proxima's planet is rocky and in an orbit that might allow water (and therefore life) to exist on its surface makes last week's discovery even more epic.

Now, here's the thing: This new planet — it's not an escape valve for our own planetary climate crisis. We don't have anything like that super-technology, so we aren't sending any human beings there anytime soon. And even if we could, we still have no idea if this new world even has an atmosphere or just a nasty barren rock.

But because Proxima is so close to us, the new telescopes we're building now will soon give us an unprecedented view of this freshly discovered world and help us unveil its secrets. That's important on its own.

But even more important is the future — the deep future.

There didn't have to be a rocky world in the habitable zone of our nearest star. Nature could have played things differently.

Instead, this world is out there. It's waiting.

And regardless of what it looks like today, perhaps 5, 000 years from now we will not only have reached it but reshaped it, too, making it home for billions of people — making it our first true step outwards.

That is why, perhaps, 5, 000 years from now when all the details of our age and all the names of our politicians are long forgotten — the discovery announced two weeks ago will be still be remembered and will still be a cause for celebration.

Adam Frank is a co-founder of the 13.7 blog, an astrophysics professor at the University of Rochester, a book author and a self-described "evangelist of science." You can keep up with more of what Adam is thinking on Facebook and Twitter: @adamfrank4