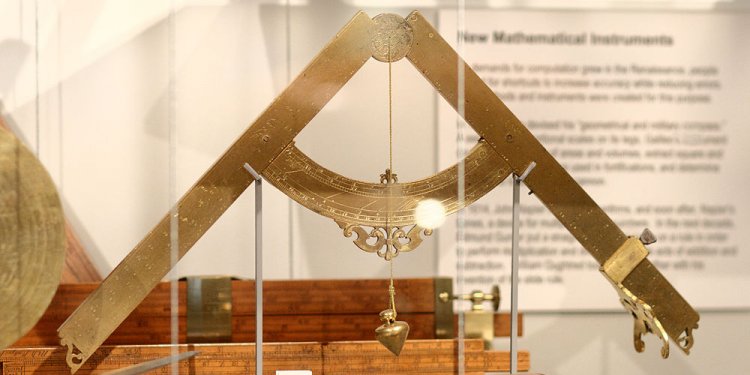 Drawings of the moon as seen with Galileo's telescope. By his own account, Galileo first observed the Moon on November 30, 1609. Comparing patterns of light and shadow in the vicinity of the terminator (dividing line between light and shadow) at first and third quarter, Galileo could argue convincingly that there exists mountains and valleys on the lunar surface. Aristotelian doctrine stipulated that celestial bodies were perfectly smooth and spherical. Drawing reproduced from Galileo's 1610 Sidereus Nuncius.

The first telescopic observations of the Moon on record were carried out by the English man Thomas Harriot (ca. 1560-1621), on the evening of July 26, 1609. However, based on his extant correspondence, as well as entries in his notebooks, as in the case of sunspots, Harriot did not appear to have drawn any particular physical significance from what he saw.

Sketches of faint stars in the Orion constellation, as seen by Galileo through his telescope. The larger stars with a central dots are those visible to the naked eye, with the topmost three corresponding to the so-called beltof Orion. That the universe contained many more stars than previously known gave moral support to the idea that it may also be a lot larger than assumed up to then. This idea had been advanced by Nicolaus Copernicus himself, as a possible explanation for the lack of observed annual parallax in the fixed stars. Reproduced from Galileo's 1610 Sidereus Nuncius.

Sketches of the four moons of Jupiter, as seen by Galileo through his telescope. What he saw are the four larger moons of Jupiter, now known as Io, Europa, Ganymede and Callisto. The drawing depicts observations from the time period January 7 to 24, 1610. Galileo had considerable difficulty in recognizing the true meaning of what he was seeing; Callisto often layout side the (restricted) field of view of his telescope, Io often lost in Jupiter's glare, and some moon occasionally disappeared in Jupiter's shadow or behind or in front of the planet itself.

Galileo named the moons Medicean Stars, after the ruling Florentine family Medici. This was a move calculated to improve his chances of moving back to Florence, and it succeeded. The names used today were coined by Simon Mayr (1573-1624), who for a time claimed priority on their discovery.

Bibliography: Debarbat, S., and Wilson, C. 1989, The Galilean satellites of Jupiter from Galileo to Cassini, Roemer and Bradley, in The General History of Astronomy, vol. 2A, eds. R. Taton and C. Wilson, Cambridge University Press, pps. 144-157.

Galileo's Dialogue concerning the two chief world systems, published in Florence in February 1632. This is usually considered as Galileo's masterpiece. Despite ostensible claims to the contrary, the Dialogue represents Galileo's strongest endorsement of the Copernican system over its Ptolemaic counterpart, and makes devastating refutations of many central tenets of Aristotelian Physics. The book still makes for fascinating reading today. Reproduced from S. Drake's 1967 translation.

On July 25 1632 the Roman authorities issued an order forbidding further distribution of the book, and recalling copies already distributed. Following Galileo's trial and condemnation in 1633 the Dialogue was put on the Index of Prohibited Books, where it remained until 1835.

The Discourses and Mathematical Demonstrations Relating to Two New Sciences (Discorsi e Dimostrazioni Matematiche Intorno a Due Nuove Scienze), published in 1638 was Galileo's final book and a scientific testament covering much of his work in physics over the preceding thirty years.

After his Dialogue Concerning the Two Chief World Systems, the Roman Inquisition had banned the publication of any of Galileo's works, including any he might write in the future. After the failure of his initial attempts to publish Two New Sciences in France, Germany, and Poland, it was published by Lodewijk Elzevir who was working in Leiden, South Holland, where the writ of the Inquisition was of less consequence (see House of Elzevir).

Discourses was written in a style similar to Dialogues, in which three men (Simplicio, Sagredo, and Salviati) discuss and debate the various questions Galileo is seeking to answer. There is a notable change in the men, however; Simplicio, in particular, is no longer quite as simple-minded and stubborn an Aristotelian as his name implies. His arguments are representative of Galileo's own early beliefs, as Sagredo represents his middle period, and Salviati proposes Galileo's newest models.

Title page of Galileo's Letters on Sunspots, published in Rome in 1613. The Letters were written to the wealthy Augsburg Magistrate MarkWesler (1558–1614), a well-known patron of the new sciences, in responses to Christoph Scheiner's own Letters on Sunspots, published through Wesler in 1612. The lynx depicted on the Title page indicates Galileo's membership in the Lincean academy (Accademia dei Lincei, for the "sharp-eyed"), the first scientific academy in Europe. The academy was founded 1603 by Prince Federigo Cesi, and was conspicuous in granting membership to a small number of selected intellectuals operating outside the mainstream academic establishment. In April 1611 Galileo became the sixth member elected to the Academy, and to the end of his life would identify himself as a "Lincean" on the title page of all his books.

In his Letters, and unlike Scheiner, Galileo correctly identifies sunspots as markings on the solar surface, as opposed to small intramercurial planets. By studying the position of sunspots on successive days Galileo also inferred that the Sun rotates, and established its rotation period as close to one lunar month. Galileo and Scheiner were later to quarrel bitterly over priority of discovery of sunspots; in fact the first recorded sunspot observation is on 8 December 1610 by the Englishman Thomas Thomas Harriott (1560–1621), and the first publication by Johann Fabricius (1587–1616), in the fall of 1611.

Title page of Galileo's Sidereus Nuncius, published in Venicein 1610. The book instantly made Galileo a European celebrity, and earned him, in July 1610, the position of chief mathematician and philosopher to the Grand Duke of Tucsany, Cosimo de Medici II, in Florence. Reproduced from the introductory essay in A. van Helden's 1989 translation.

The book described Galileo's groundbreaking telescopic discoveries, including his lunar observations, observations of faint stars invisible to the naked eye, and discovery of Jupiter's four larger Moons. Originally greeted with a good measure of scepticism, Galileo's telescopic discoveries benefited from an enthusiastic endorsement by Johannes Kepler, and shortly thereafter by the Christoph Clavius and other Jesuit astronomers at the Roman College.

The Trial of Galileo

Galileo in front of the Roman Inquisition, after a 1857 Painting by Cristiano Banti. Galileo was summoned to Rome by the Inquisition on 23 September 1632, following publication of his Dialogue in February of that year. He arrived in Rome on 13 February 1633, and was housed in the Tuscan embassy. He was called to the Holy Office (the Inquisition's headquarters) and first interrogated on 12 April 1633, sent back to the Tuscan embassy on April 30, and called in again and detained on May 10 and June 21. While detained in the Holy Office, Galileo was housed in apartments usually occupied by Inquisition officials, rather than in the usual prison cells.