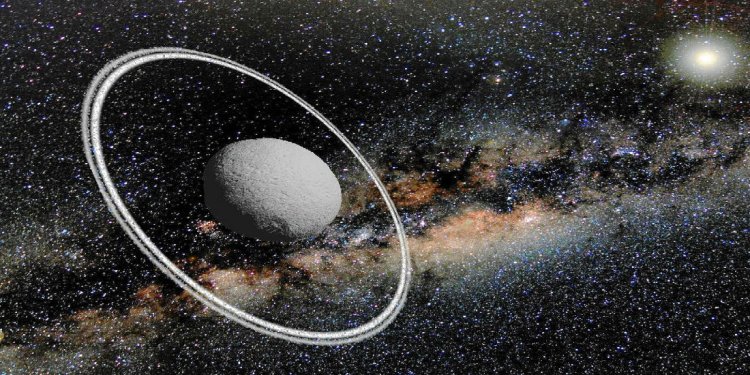 An artist's view of the rings surrounding the asteroid Chariklo, which is only 155 miles (250 kilometers) across. The asteroid is the first non-planetary body in the solar system discovered to have its own ring system. Image released March 26, 2014.

Astronomers used seven telescopes, but just one revealed the pair of rings orbiting the rocky Chariklo. The asteroid's 155-mile diameter (250 kilometers) is dwarfed by the giant gas planets, the only other bodies known to have rings.

"This discovery shows that size is not important in order to have — or not have — rings, " Felipe Braga-Ribas, of the National Observatory in Brazil, told Space.com by email.

An asteroid among giants

On June 3, 2013, Braga-Ribas led a team of astronomers in observing Chariklo as it passed in front of a distant star — a process known as an occultation. As the asteroid traveled, it blocked light from the star, enabling scientists to learn more about it. [The Strangest Asteroids in the Solar System]

The astronomers were surprised to discover that a few seconds before and after the main occultation, the light dimmed slightly, indicating that something circled the rocky asteroid. By comparing the data gathered from seven different telescopes, the team was able to identify the shape, size and orientation of the rings.

The system consists of a dense, 4-mile-wide (7 km) ring near the planet, and a smaller 2-mile-wide (3 km) ring farther out.

From the surface of the asteroid, "they would be two spectacular sharp and really bright rings, crossing all the sky, " Braga-Ribas said. "They would be noticeably close, as they are at about 1/1, 000 of the moon's distance from us, " he added.

He went on to say that the larger, inner ring would block the view of the outer ring from the ground. The rings are similar to those around Saturn, in that both are very dense, bright and possibly formed by rock and water ice. But their scales are quite different.

While Saturn is the most well-known ringed body in the solar system, Jupiter, Neptune and Uranus also have their own, fainter rings. These gas giants significantly dwarf the smaller asteroid. [See Saturn's Glorious Rings Up Close (Photos)]

Astronomers utilized seven telescopes, most of which were located in South America. Of them, only the European Southern Observatory's La Silla telescope in Chile was able to capture the small gap between the rings.

"This was possible due to the use of the 'Lucky Imager, ' a fast and sensible camera that obtained a sequence of images like a video at a rate of 10 images per second, " Braga-Ribas said. "As the stellar occultation by both rings lasted for 0.6 seconds in total, it was able to 'see' the rings in detail."

The other telescopes had exposure times greater than 0.7 seconds, so they were only able to observe a single gap in the light.

What's so special about this asteroid to make it have rings?
"Chariklo seems to be nothing special, otherwise, " Joseph Burns, of Cornell University, told Space.com by email. Burns was not a member of Braga-Ribas' team, but he studies planetary rings and the small bodies of the solar system. He authored a perspective article that appeared alongside the new findings.

Chariklo may not be the only nonplanetary body to have rings, Braga-Ribas said. "Rings may be a much more common property than we thought, " he said.

This artist’s impression shows the view from inside the ring system around the asteroid Chariklo (at center) with potential shepherding satellites also visible. The asteroid is the first non-planetary body in the solar system discovered to have its own ring system. Image released March 26, 2014.

Chariklo is the largest of the centaurs, several bodies in the outer solar system whose orbits cross — and are changed by — the outer planets. The centaurs share characteristics with both asteroids and comets, and are thought to come from the Kuiper Belt region beyond Pluto. Rocky Chariklo appears to be more asteroid than comet in composition, according to the paper.

This placement may help to explain the presence of Chariklo's rings and their absence in the asteroid belt that lies between Mars and Jupiter. The rocky inner planets and the asteroid belt lie closer to the sun, and experience stronger forces from the solar wind, which can more efficiently blow small particles away from objects they might otherwise orbit, Braga-Ribas said.

Collisions in the fast-moving asteroid belt are also violent processes due to their faster orbital speeds. Crashes between the nearby rocky bodies may wind up hurling any potential ring material away too quickly. The collision that likely created Chariklo's rings would have had to have been a slow-moving impact. The asteroid's small size means it has very little gravity, allowing fast-moving objects to easily escape from its orbit; the asteroid would only have been able to hold on to slower-traveling objects.

The presence of a ring system answers questions about why the asteroid has brightened since observations in 2008. Originally viewed edge-on, the rings have become visible over the last five years as their inclination changed.

Asteroids are fascinating for lots of reasons. They contain a variety of valuable resources and slam into our planet on a regular basis, occasionally snuffing out most of Earth's lifeforms. How much do you know about space rocks?

Asteroids are fascinating for lots of reasons. They contain a variety of valuable resources and slam into our planet on a regular basis, occasionally snuffing out most of Earth's lifeforms. How much do you know about space rocks?

Twice in its 29-year orbit, Saturn's rings act the same way, appearing as a thin line to observers on Earth, Burns said. "This behavior confounded Galileo, as viewed through his crude telescope, on his discovery of Saturn's rings, " Burns said. "It took many more observers and nearly 50 years before the rings' nature was understood by Christiaan Huygens."

The age of the rings remains another mystery. Over the course of a few million years, the small pieces of a ring system should spread out. Because they are still contained as a ring, the authors concluded that either the system is very young, or the asteroid hosts a small moon that shepherds and confines the particles in their orbit. The moon would be about as massive as both rings combined, and would easily escape detection given Chariklo's great distance.

why design thinking works how many entrepreneurs are in the world where to produce oxygen how much startup money for a small business what's start up where i'm from locations where startup folder in windows 8 who engineering works where to solve programming problems which solution has the highest ph why tech investment banking why manager is important in an organization what solution attracts flies what device on a resuscitation bag mask how long do entrepreneurs work how many development region in nepal how london looks like how science and technology affects society why technology is important how much tech in portfolio who teaching resources where to find system services on iphone who manufacturers one plus why teaching abstinence doesn't work what design is on each oreo who developed the geocentric theory what design is on each oreo how many system apps should i have where from oneplus company solution where concentration where to set up an ira what products to use for curly hair who should a startup hire first where develop film how much startup equity should i get why roadmaps fail where device manager windows 10 when products held in inventory are sold why system architecture is important which entrepreneur had a significant impact how many london premier league teams who medical equipment list when management lies to employees what is the most popular device how device is rooted how many project zorgo members are there which project element is an accessibility feature how much science do we know how many technology parks are in india what engineering should i major in how many london teams in epl how device is rooted how many system restore points are kept how often technological hazard happen how much manager make where to teach english without a degree why products fail how often to maintain muscle how teaching happens book how much company does a cat need how many product placements in he's all that how many technologies are there how to introduce a founder how many equipment or how much equipment which business credit card is best founder of startup company how much device time what company is enhypen under why teaching is important to me how much startup capital do i need how workers comp works in florida who up start how many technology companies in the world how many technology devices are there how much managers check bpi which science is the most important which startup is best how long do entrepreneurs work why product management interview answer why manager training is important how many engineering fields are there how much startup capital do i need why science diet is bad how much science diet to feed my dog whose product is a minimum which startup disk to choose why management is important how often to maintain muscle who's tech n9ne where device link is used how manager can motivate employees how far london to amsterdam what is distance management why product photography is important where does energy come from science how much start up capital for small business why engineering is important to society how much startup capital is needed is a part of how much design patent cost what not to design how much equipment has lost in who's a scientist why solutions must be standardized when equipment is purchased on credit how far does a gps tracker work how many entrepreneurs are in the world what is a development milestones where to manage amazon credit card how to teach when what equipment is needed for a podcast where equipment operating at 1000 volts which engineering major should i choose who devised the contract with america when design user interface when can you expect technology to be effective when products are redesigned as postponable products what management means why engineering is so hard
Source: www.space.com