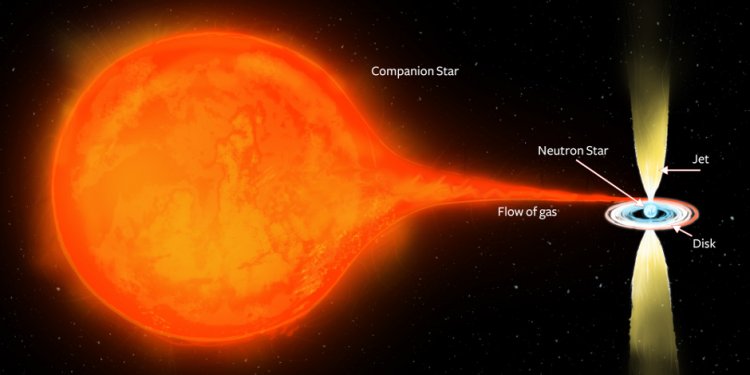 EnchantedLearning.com is a user-supported site.
As a bonus, site members have access to a banner-ad-free version of the site, with print-friendly pages.
Click here to learn more.

Each star in the sky is an enormous glowing ball of gas. Our sun is a medium-sized star.

Stars can live for billions of years. A star is born when an enormous cloud of hydrogen gas collapses until it is hot enough to burn nuclear fuel (producing tremendous amounts heat and radiation). As the nuclear fuel runs out (in about 5 billion years), the star expands and the core contracts, becoming a giant star which eventually explodes and turns into a dim, cool object (a black dwarf, neutron star, or black hole, depending on its initial mass). The largest stars have the shortest life span (still billions of years); more massive stars burn hotter and faster than their smaller counterparts (like the Sun).

GLOBULAR CLUSTER
A globular star cluster is a spherical group of up to a million stars held together by gravity. These remote objects lie mostly around the central bulge of spiral galaxies.

There are larger groups of stars, called clusters. These are relatively unorganized collections of stars. An open cluster is a loose collection of up to about 1, 000 stars. Examples of open clusters include the Pleiades and Hyades.

Huge, organized collections of stars are called galaxies. Our solar system is located in the Milky Way Galaxy, a spiral galaxy. For more in-depth information on galaxies, click here.

All groups of stars are held together by gravitational forces.

WHY ARE STARS HOT AND BRIGHT?
Nuclear Fusion and Nucleosynthesis
Stars are giant nuclear reactors. In the center of stars, atoms are taken apart by tremendous atomic collisions that alter the atomic structure and release an enormous amount of energy. This makes stars hot and bright. In most stars, the primary reaction converts hydrogen atoms into helium atoms, releasing an enormous amount of energy. This reaction is called nuclear fusion because it fused the nuclei (center) of atoms together, forming a new nucleus. The process of forming a new nucleus (and element) is nucleosynthesis.

WHY DO STARS TWINKLE?
The scientific name for the twinkling of stars is stellar scintillation (or astronomical scintillation). Stars twinkle when we see them from the Earth's surface because we are viewing them through thick layers of turbulent (moving) air in the Earth's atmosphere.

Stars (except for the Sun) appear as tiny dots in the sky; as their light travels through the many layers of the Earth's atmosphere, the light of the star is bent (refracted) many times and in random directions (light is bent when it hits a change in density - like a pocket of cold air or hot air). This random refraction results in the star winking out (it looks as though the star moves a bit, and our eye interprets this as twinkling).