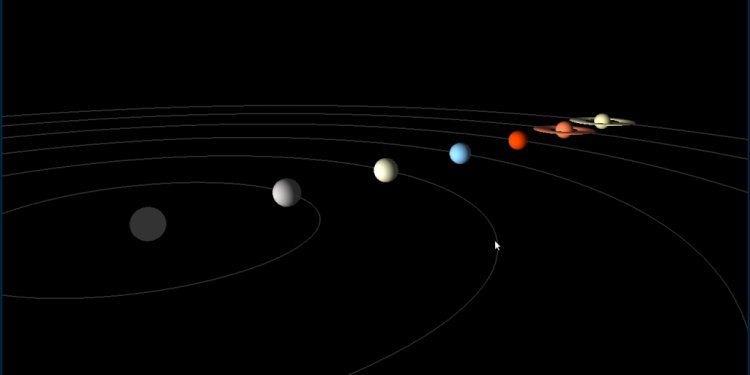 Things that are closer together pull harder on their neighbours, and since all the planets and the sun are in relative proximity to one another, they all pull harder on each other than on stars, which are much further away.

By pulling on each other so hard, they wind up spinning, since if they weren't moving so fast, they would all just crash into each other. The rotation is all in the same direction in our solar system, much like the animation shows above. Things going faster in their orbits are closer to the sun, and things going slower are further away, just like a giant whirlpool in your bathtub. All of this started when the solar system was formed, and with nothing to stop everything from moving it will keep happening forever.

Edit: The sun orbits that spot, too, slowly, in tune with Jupiter's orbit of the sun (the sun doesn't really 'orbit' that spot like we do, it 'braces' itself there in a tug-o-war with the rest of us, but mainly with Jupiter).

The centre of our solar system is it's barycenter, or it's centre of mass. Please enjoy this 4 minute silent movie, the sound of space itself.

This behavior of nature allows us to discover strange new worlds, by observing other stars that wobble, as our sun wobbles, as long as those stars aren't too far away from us that we can't tell if they wobble or not.