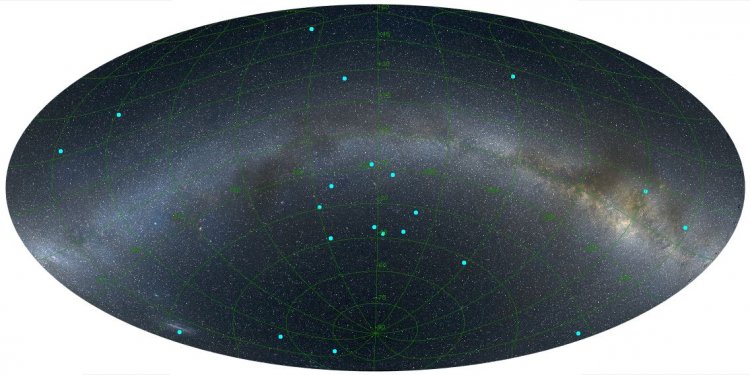 The cosmos has no special direction that might be used to define a universal "up, " according to a new study.

Ever peer into the night sky and wonder whether space is really the same in all directions or whether the cosmos might be whirling about like a vast top? Now, one team of cosmologists has used the oldest radiation there is, the afterglow of the big bang, or the cosmic microwave background (CMB), to show that the universe is “isotropic, ” or the same no matter which way you look: There is no spin axis or any other special direction in space. In fact, they estimate that there is only a one-in-121, 000 chance of a preferred direction—the best evidence yet for an isotropic universe. That finding should provide some comfort for cosmologists, whose standard model of the evolution of the universe rests on an assumption of such uniformity.

"It's a much more comprehensive analysis than in previous cases, " says Anthony Challinor, a cosmologist at the University of Cambridge in the United Kingdom who was not involved in the work. "The question of how isotropic is the universe is of fundamental importance."

In 1543, Nicolaus Copernicus knocked Earth and humanity from the supposed center of the universe by noting that Earth goes around the sun, not the other way around. That observation gave birth to the Copernican principle, which holds that we have no special place in the infinite, centerless universe. In the early 20th century, with the advent of Albert Einstein's general theory of relativity and the observation that the universe is expanding in all directions, that idea evolved into the cosmological principle, which assumes that the universe is the same everywhere and in every direction. In fancier terms, the universe is both homogeneous and isotropic.

The principle has its limitations. As the existence of stars and galaxies shows, matter is not distributed exactly the same way everywhere. This, they assume, arises because the universe was born as a homogeneous soup of subatomic particles in the big bang. As the universe underwent an exponential growth spurt called inflation, tiny quantum fluctuations in that soup expanded to gargantuan sizes, providing density variations that would seed the galaxies. Yet, the standard model of cosmology rests on the assumption that, on the largest scales, these variations are insignificant, and space is homogeneous and isotropic.

But it doesn't necessarily have to be that way. Theoretically, it's possible that space could be the same from point to point, but still have special directions—much as a diamond crystal has uniform density, but specific directions in which its atoms line up in rows. There were even some hints of such "anisotropy" in the early 2000s, when measurements from NASA's Wilkinson Microwave Anisotropy Probe (WMAP) spacecraft suggested that some subtle undulations in the motley CMB appeared to line up along a so-called "axis of evil"—which most researchers discount as a statistical fluke.

Now, Daniela Saadeh and Andrew Pontzen, cosmologists at University College London, and colleagues have ruled out special directions with the most stringent test yet. They also use measurements of the CMB, this time taken with the European Space Agency's Planck spacecraft, which collected data from 2009 to 2013 and provided far more precise CMB maps than WMAP. Instead of looking for curious imbalances in the CMB, they systematically worked the other way around. They considered all the ways that space could have a preferred direction and how such scenarios might imprint themselves on the CMB. Then they searched for those specific signs in the data.

An anisotropic universe would leave telltale patterns in the cosmic microwave background (bottom). But the actual CMB (top) shows only random noise and no signs of such patterns.

For example, space could be expanding at different speeds along different axes. Such differential expansion would cause the radiation from some directions to stretch to longer wavelengths than in others, and the upshot would be a big bull's-eye pattern in the CMB. Or, space could be rotating about a particular axis, which would create a spiral pattern in the CMB. Finally, the newborn universe could have been agitated by distortions in space itself known as gravitational waves, which would stretch the whole cosmos in one direction and compress it in a perpendicular direction. That sort of motion would leave more complex spirals in the CMB. In all, the researchers identify five potential patterns or "modes" in the CMB that would signal some sort of special direction in space.

Using a supercomputer, Saadeh, Pontzen, and colleagues look for evidence of any such patterns lurking faintly behind random variations in the CMB's temperature—a process not unlike trying to pick out a weak picture through extreme static on an old-fashioned TV screen. To give their study even more bite, they also look for accompanying patterns in the polarization of the CMB's microwaves, which Planck also mapped. For three of the five patterns, "polarization data is the killer thing, " Saadeh says.

Others had performed similar tests for signs that the universe is spinning, but Saadeh, Pontzen, and colleagues improve the limit on such a signal by an order of magnitude. They also put limits on all other kinds of anisotropy, as they report in a paper in press at Physical Review Letters. "For the first time, we really exclude anisotropy, " Saadeh says. "Before, it was only that it hadn't been probed."