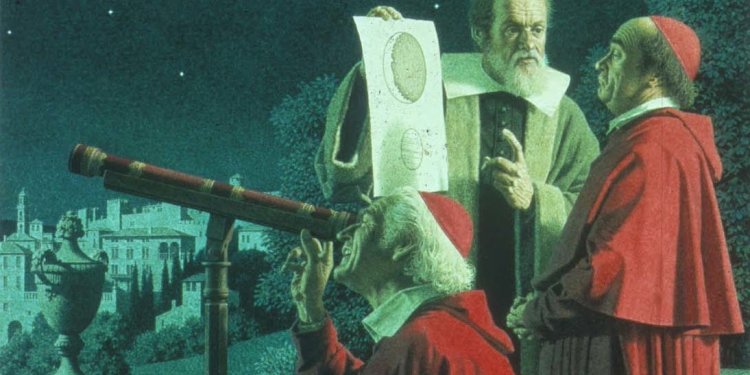 The invention of the telescope played an important role in advancing our understanding of Earth's place in the cosmos. While there is evidence that the principals of telescopes were known in the late 16th century, the first telescopes were created in the Netherlands in 1608. Spectacle makers Hans Lippershey & Zacharias Janssen and Jacob Metius independently created telescopes. The telescope emerged from a tradition of craftsmanship and technical innovation around spectacles and developments in the science of optics traced back through Roger Bacon and a series of Islamic scientists, in particular Al-Kindi (c. 801–873), Ibn Sahl (c. 940-1000) and Ibn al-Haytham (965–1040).

The story of Galileo's telescopic observations illustrates how a tool for seeing and collecting evidence can dramatically change our understanding of the cosmos.

Early telescopes were primarily used for making Earth-bound observations, such as surveying and military tactics. Galileo Galilei (1564-1652) was part of a small group of astronomers who turned telescopes towards the heavens. After hearing about the "Danish perspective glass" in 1609, Galileo constructed his own telescope. He subsequently demonstrated the telescope in Venice. His demonstration of the telescope earned him a lifetime lectureship.

After his initial success, Galileo focused on refining the instrument. The initial telescope he created (and the Dutch ones it was based on) magnified objects three diameters. That is, it made things look three times larger than they did with the naked eye. Through refining the design of the telescope he developed an instrument that could magnify eight times, and eventually thirty times.

This increased magnification of heavenly objects had a significant and immediate impact. These new observations were by no means exclusive to Galileo. The story of Galileo and the telescope is a powerful example of the key role that technologies play in enabling advances in scientific knowledge. With that said, the telescope isn't the only technology at play in this story. Galileo deftly used the printed book and the design of prints in his books to present his research to the learned community. This is not a story of a lone thinker theorizing and piecing together a new model of the cosmos. Quite the contrary, an array of individuals in the early 17th century took the newly created telescopes and pointed them toward the heavens. Unlike those other observers, however, Galileo rapidly published his findings. In some cases, Galileo understood the significance and importance of these observations more readily than his contemporaries. It was this understanding, and foresight to publish, that made Galileo's ideas stand the test of time.

Shortly after his first telescopic observations of the heavens, Galileo began sketching his observations. He wanted to get his findings out. His observations and interpretations of stars, the moon, Jupiter, the sun and the phases of the planet Venus, were critical in refining our understanding of the cosmos. In March of 1610, Galileo published the initial results of his telescopic observations in Starry Messenger (Sidereus Nuncius, this short astronomical treatise quickly traveled to the corners of learned society.

The Moon is not a Perfect Sphere

The engravings of the Moon, created from Galileo's artfully drawn sketches, presented readers with a radically different perspective on the Moon. Due to Galileo's training in Renaissance art and an understanding of chiaroscuro (a technique for shading light and dark) he quickly understood that the shadows he was seeing were actually mountains and craters. From his sketches, he made estimates of their heights and depths. These observations, only possible by the magnifying power of the telescope, clearly suggested that the Aristotelian idea of the Moon as a translucent perfect sphere (or as Dante had suggested an "eternal pearl") were wrong. The Moon was no longer a perfect heavenly object; it now clearly had features and a topology similar in many ways to the Earth. The notion that the moon had a topology like the Earth led to speculation on what life might be like on the Moon.

It's now understood that English astronomer Thomas Harriot, (1560-1621) made the first recorded observations of the Moon through a telescope, a month before Galileo in July of 1609. Moreover, the map Harriot created of the Moon in 1612 or 1613 is more detailed than Galileo's. Harriot observed the Moon first, and the maps he created included more information, but he did not broadly distribute his work. However, over 500 copies of the Starry Messenger were printed and sold, solidifying Galileo's legacy in astronomy.

Jupiter has its Own Moons

When Galileo turned his telescope to observe Jupiter, he saw what he initially thought to be three previously unobserved fixed stars. After continued observations it became clear that they were not fixed, and in a matter of days he had come to the conclusion that these new stars were in fact orbiting Jupiter. He had discovered three of the largest moons of Jupiter.

The implications of this discovery, of objects orbiting a planet, were part of what pushed Galileo to argue for a sun-centered cosmos. Jupiter's moons countered a key argument against the Earth orbiting the sun. Critics of Copernicus' sun-centered cosmos asked, how could the Earth drag the moon across the heavens? Remember, the idea of the underlying mechanism of gravity wouldn't come until Newton's Principia Mathematica in 1687, which makes this both a reasonable and important question. Since there was wide agreement that Jupiter was already in motion, the fact that Jupiter clearly had its own moons offered a clear refutation of an important critique of the heliocentric system.

In Mundus Jovialis (1614) Simon Marius claimed that he, not Galileo, had first discovered the moons of Jupiter. In his times, Marius was publicly condemned as a plagiarist. Galileo had published his results already in 1610 and was rather well known and powerful in renaissance court. Only in the 19th century, would historians return to examine the evidence. It turns out that Marius had not plagiarized Galileo. Clearly his observations were different; in fact he had more accurately charted the orbits of Jupiter's moons. It's now broadly understood that Marius was an independent observer of Jupiter's moons.

In observing the sun, Galileo saw a series of "imperfections". He had discovered sunspots. Monitoring these spots on the sun demonstrated that the sun in fact rotated. Furthermore, later observations by Francesco Sizzi in 1612 suggested that the spots on the sun actually changed over time. It would seem that the Sun, like the Moon, was not the perfect sphere that learned Europeans thought of as a key feature of their universe.