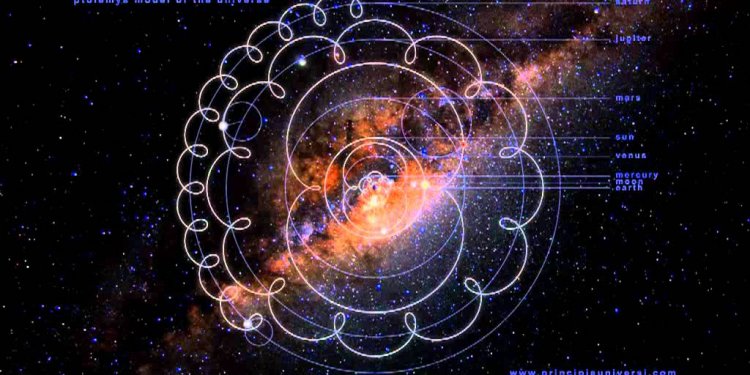 In Kepler's day three models existed to explain the observed motions of the "wandering stars." However, no clear criteria of physical "truthfulness" existed to discern which of these models corresponded to the actual, physical universe. Each model could be used to predict the future longitude and latitude of planets in the sky for a few years out. All of them became less accurate as time progressed.

The ancient, Earth-centered model of Egyptian astronomer Claudius Ptolemy (c. 90-c. 180 AD) dominated European astronomy for fifteen centuries. Ptolemy believed that the Sun and planets orbited the Earth and accounted for the irregular motion of the planets by spinning wheels that he called "epicycles." The animation depicts Mars moving on its "epicycle" around the Sun.

Nicholas Copernicus, a Polish statesman and mathematician, published a model in 1543 in which he asserted that the Sun lay at the center of the planetary system. Copernicus replaced the Ptolemaic computational device known as the “equant, ” which Ptolemy used to describe the changing speed of the planet, with a second "epicycle" on the grounds that Ptolemy did not rigorously adhere to uniform circular motion. The action of two, imaginary moving circles thus suffices to carry the planet in the Copernican model. Copernicus, Kepler wrote, "strives to outdo Ptolemy in the uniformity of motions, " but "he is in turn outdone by him in the perfection of the planetary path"-meaning, Ptolemy's model was simpler in some respects. Copernicus (and Ptolemy) both believed that planetary must be composed of perfect circles in conformity with the precepts of Aristotelian metaphysics. Despite the conceptual breakthrough involved in asserting the central position of the Sun in the planetary system, Copernicus' model was no more accurate than Ptolemaic astronomy for calculating where the planets would appear in the sky-largely because Copernicus used Ptolemy's 1, 500 year old data to build his system.

Tycho Brahe, the eccentric Danish nobleman and astronomer who compiled the voluminous astronomical data which Kepler would use to construct his theories, developed and promoted his own model of the cosmos-a kind of middle way between Ptolemy and Copernicus. Tycho has the planets orbiting the Sun, but the Sun orbiting the Earth. Looking back at Ptolemy's system, see how in Tycho's view the Sun acts like a Ptolemaic “epicycle” for the planets.

"Equivalence of the Hypotheses"

Believe it or not, these three models which seem radically different from a conceptual standpoint all produce results which "are for practical purposes equivalent within a hair's breadth, " as Kepler noted.

This should not be surprising, given that each system acted as a kind of computer, or computational formula, which enabled astronomers to predict future planetary positions based on past data. If the model did not predict planetary positions reasonably accurately, it would obviously be of no use! In a sense, the Ptolemaic, Copernican and Tychonic systems acted like "regression models" (for those acquainted with modern statistics), which worked by fitting a formula to past data patterns, and so allowed astronomers to predict future events.

Each model appeared to "work" to within a reasonable margin or error. But how, then, could one tell which model was "true?" Indeed, there was no way to determine the true organization and dynamics based on discrepancies between the models alone.

This question defined the astronomer's dilemma as a young Kepler set out to investigate the Solar System.

Kepler started from the following premise: The given models of planetary motion all produced absurdities of one variety or another. For example, look at this diagram at right showing the actual path which Ptolemaic theory causes a planet travel. It goes in loops!

"Nothing like [this] had ever before been published, " notes William H. Donahue, when Kepler included the diagram at right in his Astronomia Nova. "It had apparently not occurred to anyone to consider the actual path traversed by a planet” in the Ptolemaic theory.

Ptolemy's "epicycle" describes the motion of Mars as follows:

Kepler's diagram is animated below:

Aristotelian physics represented the reigning, Church-endorsed scientific school during Kepler's era. According to Aristotle, action in the universe could only adhere to perfectly circular forms. Uniform, unchanging circles constituted the shape God found "most perfect"-yet as we have seen scientists had to come up with all sorts of awkward constructions to model clearly non-uniform planetary motions with mechanisms built out of circular orbs. And in the end, Ptolemy's theory caused Mars to trace out a pretzel-shaped path! Clearly, Kepler saw, something was wrong with astronomy in his day from an epistemological standpoint.

Kepler's predecessors glossed over the obvious contradictions in the state of scientific knowledge by declaring that humankind could not know how the heavens really worked. They declared that the heavens were made of an entirely different material (called "quinta essentia, " or "fifth essence, " abstracted from the earthly elements). This enabled them to dispense with logical difficulties. The "quinta essentia" abided by different laws than the terrestrial sphere.

But to one young astronomer working in Graz, Austria, this philosophy sounded like a foolish rationalization for the inadequate state of prevailing scientific knowledge. God, Kepler believed, would surely not be so arbitrary as to make the laws of the world undiscoverable to man, his creation. Men and women could know the mysteries of the world, including the causes for the motions of the wandering stars in the heavens. As he stated in his Optics, Kepler took for a certainty the fact that "this theater of the world is so ordered that there exist in it suitable signs by which human minds, likenesses of God, are not only invited to study divine works, from which they may evaluate the founder's goodness, but are assisted in inquiring more deeply." (Optics, Donahue translation, p. 15)