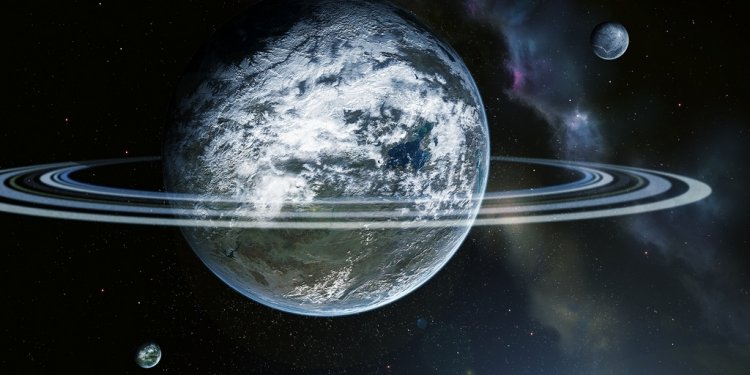 Illustrator and author Ron Miller specializes in, among other things, incredible visualizations of other worlds. He has rendered the surface of Titan, peered into black holes for Discover magazine, and designed a Pluto stamp that is currently hurtling toward the far reaches of our solar system aboard the New Horizons spacecraft.

Now, Miller brings his visualizations back to Earth for a series exploring what our skies would look like with Saturn’s majestic rings. Miller strived to make the images scientifically accurate, adding nice touches like orange-pink shadows resulting from sunlight passing through the Earth’s atmosphere. He also shows the rings from a variety of latitudes and landscapes, from the U.S. Capitol building to Mayan ruins in Guatemala.

We'll start with Washington, D.C. and work our way southward.

From Washington, D.C., the rings would only fill a portion of the sky, but appear striking nonetheless. Here, we see them at sunrise.

From Guatemala, only 14 degrees above the equator, the rings would begin to stretch across the horizon. Their reflected light would make the moon much brighter.

From Earth's equator, Saturn's rings would be viewed edge-on, appearing as a thin, bright line bisecting the sky.

Equinox at the equator

At the March and September equinoxes, the Sun would be positioned directly over the rings, casting a dramatic shadow at the equator.

At midnight at the Tropic of Capricorn, which sits at 23 degrees south latitude, the Earth casts a shadow over the middle of the rings, while the outer portions remain lit.

Note: Ron Miller has graciously allowed us to repost these images. They are copyrighted, and any further use requires his permission.