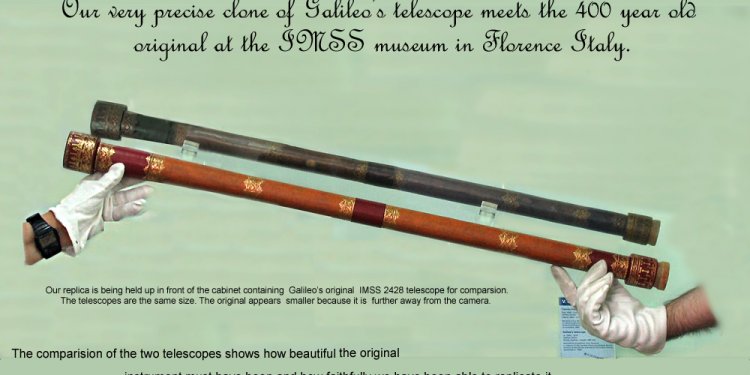 This was the climate into which Galileo Galilei emerged to pioneer a new world system. Born at Pisa, Italy, on 16 February 1564, his father, Vincenzo Galilei, was a renowned composer who instigated his own revolution in the arts by disputing the current theories on the structure of music. Galileo's questioning attitude towards authority is presumed to be inherited from Vincenzo, who was no stranger to publishing challenging remarks such as the one that appears in a study on counter-point: "It appears to me that those who try to prove an assertion by relying simply on the weight of authority act very absurdly".

Galileo received an excellent education at a monastery near Florence and in 1581, aged 17, showed enough talent for his father to send him to the University of Pisa to study medicine. Though born into the ranks of lower nobility, the Galilei family struggled to make ends meet and were unable to afford the university fees. It was hoped that Galileo would secure one of 40 scholarships available.

In the second year he showed enough promise to discover that a pendulum of any given length swings at a constant frequency, which led to the invention of the 'pulsilogium', a medical device used for timing the pulse of patients. However, Galileo was already attracting animosity by his reluctance to accept the common philosophy and the scholarship was refused, forcing him to leave the university without attaining his degree. Naturally, biographers have looked upon this as an early resistance to his liberal ideas, though Arthur Koestler in his book, The Sleepwalkers, writes: "It is more likely that the refusal of the scholarship was not due to the unpopularity of Galileo's views, but of his person - that cold, sarcastic presumption, by which he managed to spoil his case throughout his life".

Excluded from university life, Galileo tutored privately and managed to maintain his studies. He developed his interest in mechanics, writing treatises on his inventions which he circulated in manuscript. Another early invention was a hydrostatic balance which attracted the attention of a number of scholars, one of whom, Marchese Guidobaldo del Monte, befriended Galileo and began a chain of recommendations that brought him to the attention of Ferdinand de Medici, the Duke of Tuscany. In a rather ironic twist of fate the Duke was so impressed with Galileo that he appointed him as a lecturer at the university which four years earlier had refused his scholarship. Just three years on, aged 28, he rose to the position of Chair of Mathematics at the esteemed University of Padua, where he remained until 1610.

Over the next 18 years Galileo established a reputation for his lectures, mechanical inventions and treatises, and remained free from major controversy. He had an affair with a woman of the Venetian lower class, Marina Gamba, who gave him three children, two girls and a boy, between 1600 and l606. During this time he developed theories on heliocentricity but refrained from publishing them, fearing them likely to attract ridicule. He was to reach the age of 46 before making any open comment on his views, but his private correspondence shows he was convinced of the Copernican argument from the start of his academic career.

In 1597, Galileo was to receive his first contact from Johannes Kepler, then aged 26 and employed as Professor of Mathematics at Grantz in Austria. Kepler had completed The Cosmic Mystery, a treatise which expressed arguments in favour of Copernicus' Sun-centred universe. He sent a copy as a gift to the Chair of Mathematics at Padua, anxious for academic feedback. Galileo replied immediately, and wrote in cordial terms:

"I indeed congratulate myself on having an associate in the study of Truth who is a friend of Truth. For it is a misery that so few exist who pursue the Truth and do not pervert philosophical reason. I adopted the teachings of Copernicus many years ago, and his point of view enables me to explain many phenomena of nature which certainly remain inexplicable according to the more current hypotheses. I have written many arguments in support of him and in refutation of the opposite view - which, however, so far I have not dared to bring into the public light, frightened by the fate of Copernicus himself, our teacher who, though he acquired immortal fame with some, is yet to remain to an infinite number of others (for such is the number of fools) an object of ridicule and derision. I would certainly dare to publish my reflections at once if more people like you existed; as they don't. I shall refrain from doing so."

Although Kepler replied, imploring him to take a different stance and air his views, Galileo ignored his letter and ended the correspondence. It was 16 years before he would produce the first public indication of his beliefs; throughout the interim he continued to teach, and appeared to endorse the traditional Aristotelian arguments that the Earth did not move.

The reasons for Galileo's hesitation were based more upon the fear of ridicule than persecution. Scholars were not forbidden to discuss alternative cosmological theories, but unless physical proof was provided it was deemed inappropriate to speculate upon their relevance or to present them as 'Truths'. Galileo knew that although heliocentricity offered a more elegant explanation of planetary motion, he had no means of proving it. The instruments available at the time were not sophisticated enough to register stellar parallax , one proof of the Earth's motion, and against this the physical senses perceive the Sun to rise and set around the Earth. As part of his duties Galileo was obligated to teach the traditional arguments that if the Earth were to rotate it would disintegrate and the clouds would be left behind, that things fall to the Earth because it is the centre of the universe, suspended and unmoving because the exterior of the universe is equidistant on all sides, etc. He realised that to seriously contradict a theory that had the benefits of time and human experience, he needed verifiable proof. This he was never able to provide, and another century was to pass before advanced technology and Newton's theory of Gravitation could combine to uphold heliocentricity scientifically. Galileo remained convinced, however, that tangible evidence was within his reach and the invention of the telescope in 1608 gave him the inspiration and motivation to pursue his quest.

Galileo did not invent the telescope. According to his own report, it was after reading of a Dutch invention that he set to work to construct an instrument along the same principle. In August 1609 he invited the Venetian senate to inspect his own 'spy-glass' which, through a combination of a convex and concave lens, was able to magnify objects nine times greater than normal vision. The senate was greatly impressed, particularly by his suggestion that in matters of defence it would enable them to see the sails of ships two hours before they could be seen by the naked eye. When he presented his spy glass to them as a present they expressed their appreciation by doubling his salary to a thousand scudi a year and guaranteeing his position at Padua for the rest of his life. No doubt he felt some embarrassment when local spectacle makers were soon able to replicate his instruments for just a few scudi, but he committed himself to improving the power of his instruments and began to turn his attention to the heavens.

In March of the following year, 1610, he published Sidereus Nuncius, the 'Messenger of the Stars', which revealed the fruits of his observations. The tract was kept deliberately short in order to make it widely accessible and the style of language was uniquely devoid of philosophy. Combined with explosive contents, it made a remarkable impact worldwide. He wrote about the surface of the Moon, dismissing the common view that it was perfectly smooth, and describing it as full of lofty mountains and deep hollows. He wrote about the fixed stars, and told how he had witnessed "other stars, in myriads, which have never been seen before, and which surpass the old, previously known stars in number more than ten times". Most importantly, he wrote of his discovery of four new planets, the Moons of Jupiter which had never been imagined before. With this, he justified his first ever 'outing' of his heliocentric beliefs, writing:

"Moreover, we have an excellent and exceedingly clear argument to put at rest the scruples of those who can tolerate the revolution of the planets about the Sun in the Copernican system, but are so disturbed by the revolution of the single moon around the earth while both of them describe an annual orbit around the Sun, that they consider this theory to be impossible."

Although Galileo here offered support to the Copernican argument, it showed no commitment on his part. He was not stating that the system was correct, but that it need not be considered impossible. In fact nothing he suggested could be taken as evidence that the Earth was in motion, and even if Jupiter was shown to be revolving around the Sun, this could be adequately explained by the suggestion offered by Tycho Brahe that all the planets beyond the Moon are in composite motion around the Sun, which itself revolves around the Earth.

The year 1610 was the crowning highlight in Galileo's career. His name became celebrated throughout the world and he was elevated to a new post as 'Chief Mathematician and Philosopher' to the Medicis. His relationship with Marina Gamba ended at this point and he left for Florence without her. Later in the year he was to make two other important discoveries, one of which offered indisputable evidence that Venus revolves around the Sun, and not the Earth.