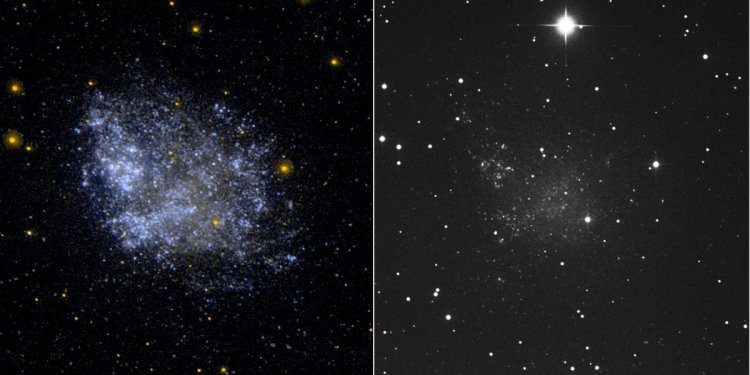 A new telescope view has revealed hundreds of galaxies that were previously obscured by the Milky Way's bulk.

Scientists used an Australian radio telescope famous for assisting with the moon landings to peer through the gas and dust of the Milky Way, and uncovered 883 galaxies hidden behind it — one-third of which were never observed before. You can see how the hidden galaxies were found in this video.

This new view of the region could help explain something called the Great Attractor, which is a mysterious spot in the universe whose strong gravity pulls on the Milky Way and thousands of other galaxies with "the force equivalent to a million billion suns, " researchers said in a statement. Scientists have known about the phenomenon since the 1970s.

Artist's impression of the galaxies behind the Milky Way in the "Zone of Avoidance."

"The Milky Way is very beautiful, of course, and it's very interesting to study our own galaxy, but it completely blocks out the view of the more distant galaxies behind it, " lead author Lister Staveley-Smith, director of science with the International Centre for Radio Astronomy Research (ICRAR) said in the statement.

The new observations, made using the Commonwealth Scientific and Industrial Research Organization (CSIRO) Parkes Observatory, in Australia, found three new galaxy concentrations (NW1, NW2 and NW3) and two new clusters (CW1 and CW2). The researchers put a new, 21-centimeter (8.3 inches) multibeam receiver on the observatory that allowed it to map the sky 13 times faster than it had previously, officials said in the statement. Thus, they were able to pin down a region beyond the Milky Way that astronomers had wondered about for decades. With further work, the team hopes the discoveries will help explain observed anomalies within the universal expansion of the cosmos, like the Great Attractor, researchers said.

Artist's impression showing how radio waves leave the new galaxies, pass through the Milky Way and are detected by the Parkes radio telescope on Earth.

"We don't actually understand what's causing this gravitational acceleration on the Milky Way or where it's coming from, " Staveley-Smith said.

"We know that in this region there are a few very large collections of galaxies we call clusters or superclusters, and our whole Milky Way is moving towards them at more than 2 million km/h [1.2 million mph], " he added.