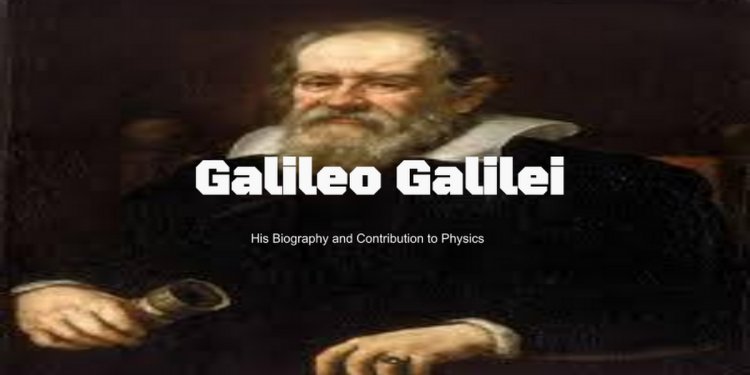 Galileo: the Telescope &
the Laws of Dynamics


Galileo Galilei (1564-1642) was a pivotal figure in the development of modern astronomy, both because of his contributions directly to astronomy, and because of his work in physics and its relation to astronomy. He provided the crucial observations that proved the Copernican hypothesis, and also laid the foundations for a correct understanding of how objects moved on the surface of the earth (dynamics) and of gravity.

Newton, who was born the same year that Galileo died, would build on Galileo's ideas to demonstrate that the laws of motion in the heavens and the laws of motion on the earth were one and the same. Thus, Galileo began and Newton completed a synthesis of astronomy and physics in which the former was recognized as but a particular example of the latter, and that would banish the notions of Aristotle almost completely from both.

One could, with considerable justification, view Galileo as the father both of modern astronomy and of modern physics.

Galileo did not invent the telescope. The Dutch, notably Christine Huygens, were the first to invent and experiment with lenses (to improve eye sight). But Galileo was the first to use the telescope to study the heavens systematically. His little telescope was poorer than even a cheap modern amateur telescope, but what he observed in the heavens rocked the very foundations of Aristotle's universe and the theological-philosophical worldview that it supported. It is said that what Galileo saw was so disturbing for some officials of the Church that they refused to even look through his telescope; they reasoned that the Devil was capable of making anything appear in the telescope, so it was best not to look through it. That is, the telescope was an instrument of the Devil. That such was so could be no clearer than the image of the moon as it appeared through Galileo's telescope:

For the moon was not perfect, it had blemishes and scars. A year later, when other copies of the telescope were made, many others made sketches of the moon, concerning its imperfect nature:

Opps it does not appear that all of the objects in Aristotle's Universe are, in fact, perfect. The moon has defects!

Well if the moon had defects then Saturn was way whacked out:

Galileo observed the Sun through his telescope and saw that the Sun had dark patches on it that we now call sunspots (he eventually went blind, perhaps from damage suffered by looking at the Sun with his telescope). Furthermore, he observed motion of the sunspots indicating that the Sun was rotating on an axis. These "blemishes" on the Sun were contrary to the doctrine of an unchanging perfect substance in the heavens, and the rotation of the Sun made it less strange that the Earth might rotate on an axis too, as required in the Copernican model. Both represented new facts that were unknown to Aristotle and Ptolemy.

The Moons of Jupiter

Galileo observed 4 points of light that changed their positions with time around the planet Jupiter on a nightly basis. He concluded that these were objects in orbit around Jupiter. Indeed, they were the 4 brightest moons of Jupiter, which are now commonly called the Galilean moons (Galileo himself called them the Medicea Siderea-the ``Medician Stars''). Here is a simulation of the system which approximates Galileo's field of view and the poor optics of his telescope (which is why the images are not sharp).

In this simulation you can observe the "real" system of Jupiter and its moons over the course of a 14 hour night. The simulation will pause 1/2 way through so that you can notice the change in positions on a 7 hour timescale. The simulation then transitions to a 10 hour day light period where Galileo is shown to have random daytime thoughts about physics. The next night is then available and the positions of the moons have advanced 10 hours forward and Galileo can then make another set of observations of the configuration of the moons as he builds up his log book:

Galileo's observations were done over the course of 15 nights in January of 1610; two of which were cloudy:

Clearly, the nightly changes in the positions of the moons relative to Jupiter was obvious for Galileo (and anyone else that observed the system).

These observations again showed that there were new things in the heavens that Aristotle and Ptolemy had known nothing about. Furthermore, they demonstrated that a planet could have moons circling it that would not be left behind as the planet moved around its orbit. One of the arguments against the Copernican system (and the original heliocentric idea of Aristarchus) had been that if the moon were in orbit around the Earth and the Earth in orbit around the Sun, the Earth would leave the Moon behind as it moved around its orbit.

The Phases of Venus

Galileo used his telescope to show that Venus went through a complete set of phases, just like the Moon.

This observation was among the most important in human history, for it provided the first conclusive observational proof that was consistent with the Copernican system but not the Ptolemaic system. The crucial point is the empirical fact that Venus is never very far from the Sun, in terms of angular displacement, in our sky Thus, as the following diagrams indicate, in the Ptolemaic system Venus should always be in crescent phase as viewed from the Earth because as it moves around its epicycle it can never be far from the direction of the sun (which lies beyond it), but in the Copernican system Venus should exhibit a complete set of phases over time as viewed from the Earth because it is illuminated from the center of its orbit.

Phases of Venus in the Ptolemaic and Copernican systems

It is important to note that this was the first empirical evidence (coming almost a century after Copernicus) that allowed a definitive test of the two models. Until that point, both the Ptolemaic and Copernican models described the available data. The primary attraction of the Copernican system was that it described the data in a simpler fashion, but here finally was conclusive evidence that not only was the Ptolemaic universe more complicated, it also was incorrect.

In addition to the observations noted above, Galileo made many other observations that undermined the authority on which the Ptolemaic universe was built. Some of these included As each new wonder was observed, increasing doubt was cast on the prevailing notion that there was nothing new to be observed in the heavens because they were made from a perfect, unchanging substance. It also raised the credibility issue: could the authority of Aristotle and Ptolemy be trusted concerning the nature of the Universe if there were so many things in the Universe about which they had been completely unaware?

Galileo and the Leaning Tower

Galileo made extensive contributions to our understanding of the laws governing the motion of objects. The famous Leaning Tower of Pisa experiment may be apocryphal. It is likely that Galileo himself did not drop two objects of very different weight from the tower to prove that (contrary to popular expectations) they would hit the ground at the same time. However, it is certain that Galileo understood the principle involved, and probably did similar experiments. The realization that, as we would say in modern terms, the acceleration due to gravity is independent of the weight of an object was important to the formulation of a theory of gravitation by Newton.

Galileo and the Concept of Inertia

Perhaps Galileo's greatest contribution to physics was his formulation of the concept of inertia: an object in a state of motion possesses an ``inertia'' that causes it to remain in that state of motion unless an external force acts on it.
Source: homework.uoregon.edu