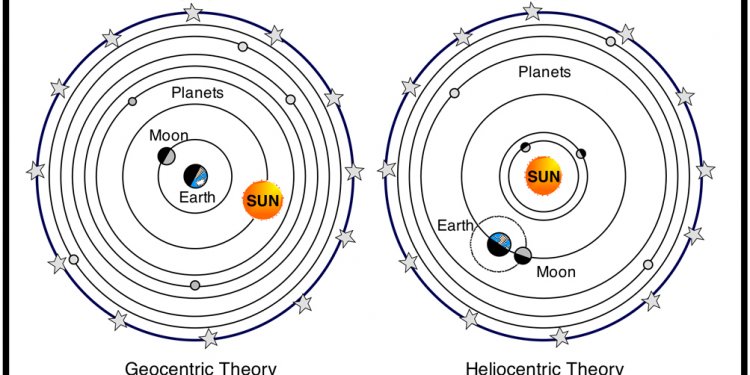 In the times of the ancient Greek philosopher/astronomers, there was much debate over whether the center of the solar system was the Sun or Earth. Eventually, most early Greek astronomers came upon the idea of a geocentric idea of the solar system. This put the Earth at the center of the System and assumed that the Moon, Sun, and other planets orbited around it (1). A visual of this concept can be seen below.

Because they didn't have many advanced tools to observe outside of the earth, astronomers had to come up with theories to explain why they felt the Earth was at the center of the Solar System. One of the things that these philosophers looked for in determining whether an Earth-centered model was correct was whether parallax effects existed when viewing stars. They hypothesized that if the earth was orbiting the sun, then the stars ought to look differently and be at different positions in the sky based on the time of when they are viewed. However, the stars are too far away so they incorrectly underestimated the amount of parallax. Because of this, they assumed that the Earth must be stationary and therefore everything else orbited around it. An example of the parallax effects can be seen below .

Copernicus used his new theory of the Solar System to help explain the retrograde motion that was observed in other planets. He thought that the apparent retrograde motion in Mars was caused by the Earth's smaller and faster orbit passing Mars' bigger and slower orbit and that it created a visual of Mars moving opposite of its orbit. Another great astronomer, Tyco Brahe, used mathematics to show that the Sun is further away from the Earth than the Moon. This helped to support Copernicus' heliocentric view of the universe (2).

Also, Copernicus was supported by Aristarchus' earlier findings. Aristarchus proved that the aforementioned parallax was not seen because stars were so far away. He uses the drawing below to show that parallax is minimal due to the distance from the Earth to the stars and therefore parallax exists. This supported the heliocentric view of the universe (3).


Many people discounted Copernicus' and Aristarchus' ideas of the universe. For one, a geocentric model of the Solar System allowed astronomers to make better predictions about astronomical events. In addition, the Church had so strongly supported a geocentric view that many thought it was a sin to believe that the Earth was not at the center of the universe. However, as time moved on and advancements in astronomy were made, people began to accept the fact that the Sun was at the center of the Solar System and the Earth and other planets orbited around it (3).
Source: www.greatthinkersofastronomy.com