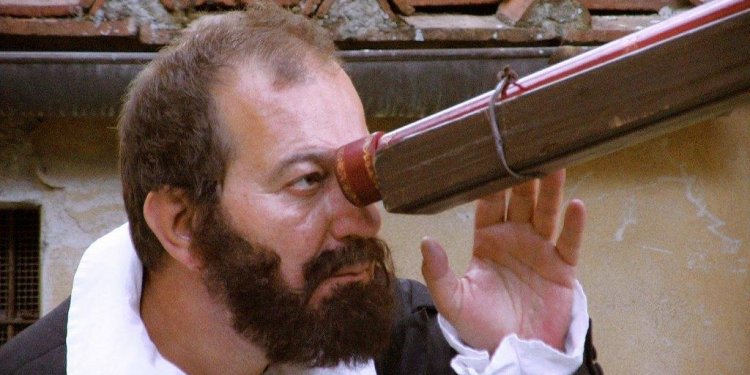 Galileo Galilei was the first scientist to recognise the importance of the telescope for astronomy. He built several such instruments himself – compiling a shopping list of the requisite components on the back of a letter. These included artillery balls and Tripoli powder.

Galileo Galilei was appointed professor of mathematics in Padua in 1592. He remained there for 18 years and over the course of this period his house was transformed into a military academy. In exchange for payment, he trained officers in the art of warfare and gave introductory lectures in geometry, technical drawing and fortress construction. Students of different nationalities resided there with their servants. He also established a workshop for the production of mathematical tools for military purposes.

Eye into space: While Galilei did not invent the telescope, he very successfully built one and used it for astronomical observations. This image shows two telescopes in his possession.

When the news of the telescope invented in Holland spread through Europe, Galileo Galilei was already renowned as an excellent technician. He could now reap the benefits of his connections with craftsmen and the experience he had gained in the workshops of spectacle-makers. Starting with a telescope that magnified things by a factor of two or three, he very quickly succeeded in building one that could achieve nine-fold magnification. When he presented his first telescope to the rulers of Venice on 24 August 1609, it had not yet occurred to him to point it at the sky; he had, instead, mainly military applications for the instrument in mind.

Once he began to observe the night sky with the telescope, Galileo became the pioneer of telescopic astronomy. From his very first look at the heavens, he sensed the enormous potential of the new instrument. The view it afforded of the numerous, previously invisible stars and the contours of the moon’s surface were reason enough to build a new and even better telescope.

How he went about this is divulged by a shopping list written on the back of a letter which Ottavio Branzini sent him from Venice. At the top of the list were items from Venice, such as Malvasia wine and clothes for his domestic partner Marina. These items are followed by a very strange list of objects: artillery balls, two tin organ pipes, Tripoli powder, iron bowls, Greek pitch and felt.

Galilei had assembled the utensils which he deemed necessary for the construction of a telescope. Artillery balls, for example, are almost perfectly rounded. Spectacle makers used them to grind glass lenses. Galilei also planned to use Greek pitch and Tripoli powder for the grinding process. The felt was required for the subsequent polishing, and the organ pipes could be used as tubes.

Using various materials, such as German spectacle lenses, mirror glass and rock crystal, and with the help of various technical processes – he had already acquired his own grinding machine for lenses in late 1609 – Galilei designed an excellent telescope. In January 1610, he spotted the first three of what would later become four Jupiter moons. He drew the moon in a way that no one had ever seen it before: with mountain ranges and valleys. He hurriedly published his explosive findings. By 12 March 1610, 550 printed copies of his work Sidereus Nuncius (Starry Messenger) had been dispatched into the world. This treatise would make him famous throughout Europe.

blogging zarada blog at vlog stardoll blog underneath blogging without social media blog of doom blogging over 40 blogging software blogging synonym blog by jackie bavaro blogging light left behind blog blog like a lady blog up north emily even blog blog contra impugnantes blog pro astra blogging explained blog on health and fitness blogging conferences 2022 blogging income blog juca kfouri what is blog made of hailey outside blog difference between blogging and microblogging blog made with react blogging memes meaning behind blogging blog through text blog during quarantine blog inside paradeplatz just outside blog blog in a sentence blogging like website blog feed initials blog beyond the obvious blogging youtube blog like tiny buddha blog videos blogging que es blog kit blog from kabul blog after 6 months should i blog or vlog blogging to earn money blog ui blog designers near me blogging for dummies blogging without wordpress blog before wedding blog via de la plata blog versus website difference between blogging and content writing blog at niramaalaa.blogspot.com blog with google blog about food blog about me blogging as a business difference between blogging and affiliate marketing blog post examples blog definition computer blogging rules blogging up meaning blogging conferences 2021 how to layout a blog food blog around the world blog on squarespace over blogging definition fall into blogging blogging with google brexit & beyond blog blog into spanish blogging topics blog xiaomi blog into mind blog through google blog banner add blog to next js blogging youtube d&d beyond blog blogging with google sites in blog or on blog coachmen beyond blog blogging from home jobs blog between in your blog or on your blog
Source: www.mpg.de